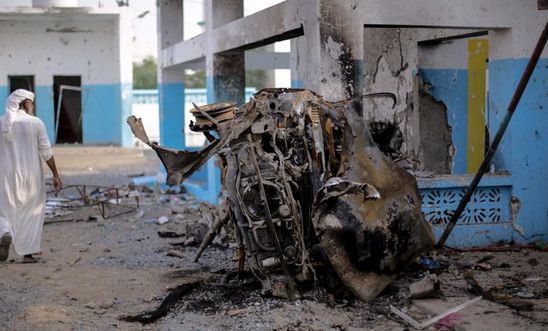 ‘How many more hospitals have to be bombed before UK ministers finally act?’ - Oliver Sprague

All countries - including the USA and UK - must immediately stop supplying weapons that could be used in the Yemen conflict, Amnesty International said, as it confirmed that a US-made bomb was used in an air strike on a Médecins Sans Frontières hospital on 15 August which killed 11 people and injured 19 others.

The bombing of the Abs Rural Hospital was the fourth attack in ten months on an MSF facility in Yemen and the attack prompted MSF to shut down its operations in northern Yemen. The hospital had treated 4,611 patients since MSF began to support it in July last year.

The closest possible military target at the time of the attack was Abs Military Camp, approximately 1km east of the hospital. According to MSF, the GPS coordinates of the hospital had repeatedly been shared with all parties to the conflict, including the Saudi Arabia-led coalition. Sixteen-year-old ambulance driver Ayman Issa Bakri was among those killed. When his body was found, he was still holding the body of the woman he’d been transferring from the ambulance.

According to independent weapons experts consulted by Amnesty who assessed photographs of a bomb fin taken by a journalist at the site, a US-made precision-guided Paveway-series aerial bomb was used in the attack.

This week the US Senate is due to vote on a draft bill to block a new $1.15 billion arms sale by the Obama administration to Saudi Arabia, which was approved in August. The deal includes the transfer of tanks, military vehicles, and related equipment and services.  In a letter to the White House, 64 Members of Congress have urged President Obama to postpone the arms sale so that the US Congress could properly debate the issue.

“Any attack on a medical facility in a war zone is an affront to humanity, yet this bombing is sadly just the latest in a grim series of attacks on hospitals and clinics by the Saudi Arabia-led coalition.

“States supplying weapons to the coalition, the USA and UK foremost among them, must use their influence to press coalition members to comply with their international obligations and to investigate suspected violations of international humanitarian law. They must also support the establishment of an independent, international inquiry.”

Despite more than a year of controversy over the UK’s supply of billions of pounds worth of arms to Saudi Arabia, UK ministers have refused to halt the sale of weapons to Riyadh. Last week two parliamentary committees again called for this to happen. Last December a group of lawyers issued a 90-page legal opinion showing that UK arms exports to Saudi Arabia were in breach of UK, EU and wider international law, given a clear risk that the arms might contribute to breaches of international humanitarian law.

Meanwhile, in May this year Amnesty reported that UK-manufactured cluster munitions - banned by more than 100 countries - we’re also being used by the Saudi Arabia-led military collation in Yemen. Yemeni civilians - including children - are known to have been killed by these munitions.

“The Abs Rural Hospital attack is far from the first Saudi coalition bombardment of a Yemeni hospital - it’s now long overdue for UK ministers to finally do the right thing and suspend weapons sales to Saudi Arabia before this carnage gets even worse.

“Ministers are always claiming the UK has a ‘rigorous’ system for assessing the risk of UK arms sales leading to atrocities like this one, so when are they going to prove that by stopping arms to Saudi Arabia?

“How many more hospitals have to be bombed before UK ministers finally act?”