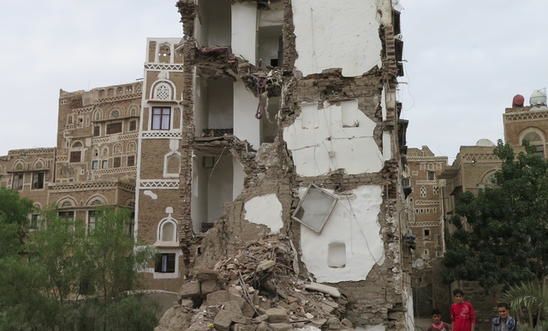 Hamid Haydara is held in Sana'a, the site of sustained conflict between the Huthi armed group and an international armed coalition © Amnesty International

Given death sentence for allegedly collaborating with Israel

“This sentence is the result of a fundamentally flawed process, including trumped-up charges, an unfair trial and credible allegations that Hamid Haydara was tortured and ill-treated in custody.

“It is also part of a wider crackdown on critics, journalists, human rights defenders and members of the Baha’i community that is causing entire families to live in fear for their safety and the safety of their loved ones.

“The Huthi authorities must immediately quash the death sentence against Hamid Haydara.

“He is a prisoner of conscience who has been tried on account of his conscientiously-held beliefs and peaceful activities as a member of the Baha’i community.

“Hamid Haydara’s death sentence must immediately be revoked and he should be immediately and unconditionally released, and given full redress.

“The Huthi authorities must end their persecution of the Baha’i community and respect their right to freedom of religion - a right that is enshrined in the country’s own constitution and international law.”

Detained for more than four years

Hamid Kamal Muhammad bin Haydara, has been detained in the capital Sana’a since December 2013. Last April, together with the Yemeni NGO, Mwatana Organisation for Human Rights, Amnesty issued a statement on Haydara ‘s case and wrote to Sana’a-based officials. Amnesty and Mwatana Organisation for Human Rights raised serious concerns regarding the basis for Haydara’s ongoing detention as well as the deeply-flawed legal proceedings in his case, including prolonged pre-trial detention, undue delays in his trial, allegations of torture and other ill-treatment in custody, lack of access to adequate medical treatment and lack of access to legal counsel during his interrogations. No response has been received yet to this correspondence.

Five Baha’is are detained by the Huthis in Yemen, including some who have been subjected to enforced disappearances. Amnesty has previously reported on the Huthis’ persecution of people from the Baha’i faith in Yemen.