Women's March on London: 'This is more than a moment. It is a movement' - Kate Allen 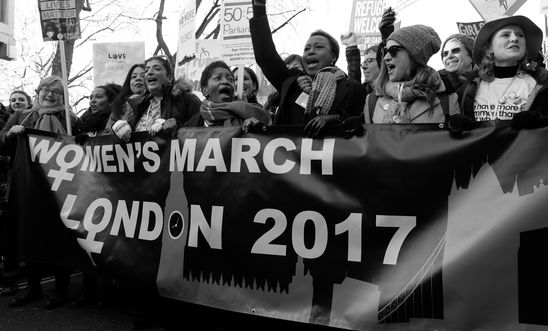 The Women's March on London yesterday, with an estimated turnout of 100,000 © Naomi Westland /Amnesty International

An estimated one hundred thousand people turned out onto the streets of London yesterday for the Women’s March, joining millions across the world in a day of global action and solidarity for women’s rights and human rights.

The London march, which took place the day after the inauguration of Donald Trump, mirrored a major demonstration in Washington DC and was one of 673 sister marches in 60 countries, from the Arctic peninsula to Zimbabwe, with an estimated global turn out of nearly five million.

Amnesty International supported the London march, along with organisations such as Black Pride, Fawcett Society, Solidarity with Refugees, Women of the World, Women 4 Refugee Women, 50:50, Women in Leadership, Women for Women International (UK) and Women’s Aid.

Kate Allen, Director of Amnesty International UK who was on the march, said:

'The women’s marches all around the world on Saturday were an incredibly important moment in the fight for women's rights and show again what women can do when we organise and mobilise. I am immensely proud that Amnesty International was part of it. But this is more than a moment. This is a movement, and people of all genders, all ages and all backgrounds are coming together to take action against attacks on human rights and women's rights.

'The current political climate, including in the UK, where budget cuts have made it very difficult for women to seek refuge if they experience violence, and where we have seen the shocking rise in hate crimes after the Brexit vote, reminds us how fragile these rights are, and that we must all continue the fight to protect them.'

Amnesty has expressed serious concerns with Donald Trump’s campaign proposals - including threatening to punish medical professionals who carry out abortions, creating a Muslim registry and banning Muslim refugees - as well as his rhetorical attacks on women, people of colour, people with disabilities, LGBTI people, activists, journalists and many of his critics. Meanwhile, in June last year Amnesty announced a new emergency campaign to combat racism and xenophobia in the UK, prompted by reports of a rise in hate crimes after the Brexit vote.