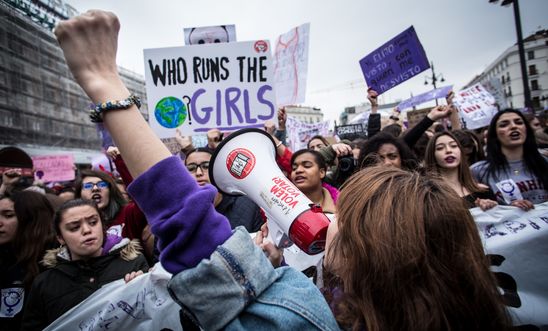 Some of the most disadvantaged women in the world are at risk of being further marginalised due to oppressive and sexist policies, Amnesty International warned today as it launched its annual review on the state of global human rights.

The 52-page report, Rights Today, launches on the 70th anniversary of the Universal Declaration of Human Rights and analyses the human rights situation in seven regions around the world.

It warns that the actions of “tough guy” world leaders pushing misogynistic, xenophobic and homophobic policies, as well as using toxic rhetoric, have placed universal freedoms and rights in fresh jeopardy.

“In 2018, we witnessed many of these self-proclaimed ‘tough guy’ leaders trying to undermine the very principle of equality – the bedrock of human rights law.

“Many of the current crop of leaders in the world have launched fresh attacks on women’s rights with their misogynistic and divisive narratives. These leaders try to argue that they are protecting traditional values that represent family interests but, the truth is, they are pushing an agenda that denies women basic equality.

“They think their policies make them tough, but they amount to little more than bully-boy tactics designed to demonise and persecute already marginalised and vulnerable communities.

“Women’s rights have consistently been placed a rung below other rights and freedoms by governments, who believe they can pay lip service to these issues while doing little in reality to protect the rights of half the population.”

Women’s rights in the UK

In the UK, Amnesty warns that outdated abortion laws, ongoing austerity, cuts to legal aid and failures to protect against all forms of violence are leaving many women - in particular those marginalised because of their race, class, sexual orientation and gender identity - in a precarious situation.

In Northern Ireland, women can still be sentenced to life in prison for having an abortion, and an estimated 23 women are forced to travel every week to seek medical treatment that they cannot access at home.

Ten years of austerity policies in the UK have also had a disproportionate impact on women, with BAME women and single mothers particularly affected. By 2020, the income of single mothers will have fallen by 18% since 2010, while Black and Asian households will see average drops in living standards of 19.2% and 20.1%, respectively.

Despite its consent based laws, the UK continues to perform badly in its conviction of rape cases. On average, one in 10 (11%) women in the EU have reported experiencing some form of sexual violence, with this number leaping to one in seven (14%) UK women.  According to the Crown Prosecution Service annual report, there has been a 23% drop in the number of rape cases charged last year (2,822 charged in 2017/18 compared with 3,671 in 2016/17). Reports this year suggested senior prosecutors have been advised to ditch ‘weak rape cases’ in an effort to improve annual conviction figures.

Earlier this year, Amnesty showed how Twitter has become a toxic place for many women, with only 9% of British women believing the social media company is doing enough to stop violence and abuse against women.

Amidst increased uncertainty for the future of human rights protections due to Brexit, Amnesty is calling on the UK Government to introduce legislation to protect women’s rights in line with the Convention on the Elimination of all Forms of Discrimination against Women.

The 2018 review finds that a growing body of policies and laws designed to subjugate and control women, especially around sexual and reproductive health, are threatening the rights of women globally.

Around the world, 40% of women of childbearing age are living in countries where abortion remains restricted.

Despite widespread activism, this year saw El Salvador refuse to decriminalise abortion in any circumstances, and the Argentinian senate vote against a bill that would have legalised abortion on demand in the first 14 weeks of pregnancy. At the same time, Polish and Guatemalan policy-makers continue to advocate for stricter abortion laws, while in the USA funding cuts to family planning clinics have put the health of millions of women at risk.

Women standing up for human rights

Despite setbacks, women around the world have been at the forefront of the battle for human rights in 2018. Amnesty’s report explores how women-led movements like Latin America’s ‘Ni Una Menos’ have galvanised mass support for women’s rights issues on a scale not seen before.

In 2018, in India and South Africa, tens of thousands took to the streets to protest endemic sexual violence. In Iran, women activists risked arrest to resist forced hijab (veiling). In Argentina and Poland, demonstrators rallied in vast numbers to demand an end to oppressive abortion laws. In the USA, Europe and Japan, millions joined the second #MeToo-led women’s march to demand an end to misogyny and abuse.

Ireland voted by a landslide to overturn the country’s abortion ban. In Saudi Arabia, women were finally granted the right to drive. In Iceland and Sweden, new laws were passed recognising sex without consent as rape. In the USA, accusations of sexual misconduct sent shockwaves through the Hollywood patriarchy, challenging decades of impunity.

Amnesty’s annual report also highlights the work of women activists who have risked their lives and freedoms to bring to light human rights injustices. They include:

Amnesty is urging governments to take action to ensure that women’s rights are upheld – this includes not only commitments to international standards, but changes to harmful national laws and proactive measures to empower women and protect their rights.

Rights Today provides a snapshot of human rights issues across major regions in 2018. They include:

Despite some progress, 2018 saw too many governments in sub-Saharan Africa continuing with brutal repression of dissent and restricting the space in which people can defend human rights. From Niger to Sierra Leone and Uganda to Zambia, governments used repressive tactics to silence human rights defenders, media, protesters and other dissenting voices.

In the Americas, 2018 brought a regressive environment for human rights, with killings of environmental defenders and social leaders rising to deeply alarming levels in countries like Colombia, and the emergence of leaders with extreme anti-human rights rhetoric, such as Brazil’s president-elect, Jair Bolsonaro. Meanwhile, human rights crises in Venezuela and Central America have forced scores of people to leave their homes in search of safety on a scale unprecedented in the region. While some countries in the Americas have welcomed those in need of help, US authorities have responded by separating and detaining families, and restricting the right to claim asylum.

In East Asia, 2018 saw positive steps for LGBTI rights, but the year was also marked by renewed crackdowns on human rights defenders. One of the most disturbing developments has been the mass detention of up to one million Uighurs, Kazakhs and other predominantly Muslim ethnic minorities in China’s Xinjiang Uighur Autonomous Region. Unprecedented peace talks took place between North and South Korea, which could have significant implications for human rights on the Korean peninsula.

In Europe, 2018 saw a continued rise of intolerance, hatred and discrimination across the continent. Asylum-seekers, refugees and migrants have been turned away or left in squalor while acts of solidarity are progressively criminalised. Hungary, Poland and Russia have led the trend whilst in the wider region, while countries such as Belarus, Azerbaijan and Tajikistan have seen further crackdowns on freedom of expression, and in Turkey a climate of fear has continued to descend. And yet, against this backdrop of xenophobic rhetoric and repressive politics, optimism persists. Activism and protest are growing: a groundswell of ordinary people with extraordinary passion are speaking out for justice and equality.

Governments across South Asia continued to harass, intimidate and persecute human rights defenders as well as other individuals campaigning for their rights. İn Bangladesh and Pakistan, authorities used draconian laws to shut down freedom of expression. In India, authorities have sought to demonise and persecute civil society groups and activists. However, there were glimmers of hope too: in May, Pakistan’s parliament passed one of the most progressive pieces of legislation on transgender rights in the world.