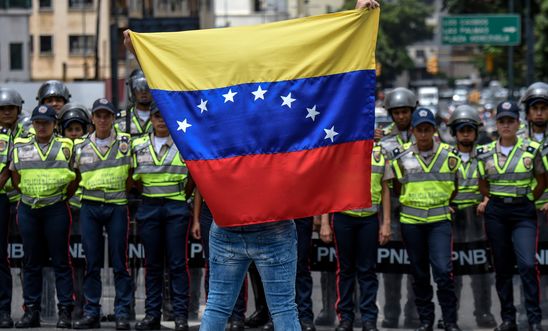 The increased deployment of military forces to repress protests, the rise in excessive use of force against protesters and others, and the use of military courts to try to silence dissenting voices illustrates a terrifying shift of the Venezuelan authorities’ approach to the human rights crisis wreaking havoc across the country, Amnesty International said after at least 60 people were killed in protests in the past 60 days.

“By deploying military force and military courts to confront an increasingly tense social and political situation, the Maduro administration is only escalating the crisis, like trying to put out a fire with gasoline.

“The level of human rights violations and the ruthless actions by the Venezuelan authorities are reminiscent of the worst times for human rights in the Americas.

“By dismissing protesters as ‘terrorists’ and charging civilians with crimes only applicable to soldiers, the Maduro administration is turning this political crisis into a violent conflict. Instead, it should be listening to people’s legitimate concerns and working to find solutions.”

The community in La Isabelica, Carabobo, is a striking example of the extent of the indiscriminate use of violence against people not involved in the recent wave of protests.

Amnesty has received direct reports of random shootings against civilians, tear gas being shot straight into homes, and a sense of generalised fear to report these incidents to the authorities.

The situation has been particularly tense in the states of Carabobo, Lara, Barinas and the border state of Táchira where more than 600 soldiers have been deployed to respond to peaceful demonstrations.

“Deploying military forces to contain demonstrations and prosecuting protesters in military courts are surefire and illegal ways of escalating this crisis even further. Instead, authorities must urgently withdraw military personnel from demonstrations, investigate the array of human rights violations reported over recent weeks and ensure people can protest without fear of being injured or killed.”

Groups of armed civilians – some of them allegedly supported by the government – are also reported to have abused demonstrators and anyone protesting against the Maduro administration. These reports are particularly concerning, considering the government’s activation of the ‘Plan Zamora’, a government program which apparently mobilises the joint use of military and civilian forces to confront the crisis taking over the country.

Authorities have not published the full details of the plan, but the reference to mobilising civilians alongside state security forces is extremely concerning in the current context of escalating tension and violence.

Since April 4, there have been at least 60 people reported dead and 1,000 injured in the context of the political crisis, according to official figures.

According to local NGOs, hundreds of people have been unfairly imprisoned in the anti-government demonstrations that have been taking place across Venezuela.

More than 300 people are believed to have been taken to military courts, accused of crimes such as “rebellion”, “terrorism” and “treason”, and effectively treated like soldiers in an armed conflict.

Venezuela’s Attorney General has recently called for access to the detainees.

In a report published in April, Amnesty highlighted the catalogue of illegal actions on the part of the Venezuelan authorities to repress freedom of expression and arbitrarily detain dissenters across the country.