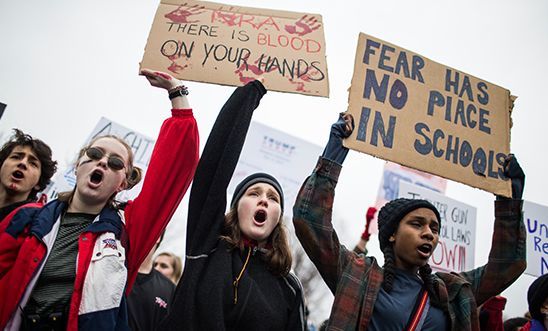 "No child should ever go to school with the fear of never coming home again. The gun violence in this country is a human rights crisis, which our leaders continue to ignore at the expense of all our children. We stand today with the Santa Clarita community in their pain.

"A whole generation of children in the U.S. are growing up afraid to go to school for fear of being shot - this is shameful. This country's leaders can no longer continue to prioritise guns above our children's lives. It's well past time to pass legislation for meaningful gun violence prevention."

Gun violence in the USA

Nearly 40% of children in the U.S. exposed to a shooting develop post-traumatic stress disorder (PTSD). Nearly 60% of high school seniors in the U.S. report fears of a shooting in their school or community. Even if a child survives a gun-related incident, long-term exposure to gun violence can lead to numerous developmental problems, including impairment of brain function, inability to focus, trouble following directions, difficulties retaining and utilising memory and difficulties engaging in organisational and decision-making tasks. They are also more susceptible to a range of mental health issues such as anxiety, post-traumatic stress disorder and depression. If not adequately addressed, these issues often cause long term problems including performance issues at school, issues with finding and keeping a job, physical health problems, trust issues in developing relationships, and violent and aggressive behavior.