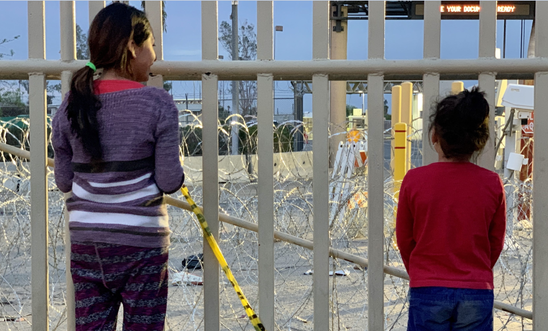 ‘These are dangerous and unconscionable policies’ - Erika Guevara-Rosas

The US and Mexican governments are forcibly returning tens of thousands of unaccompanied children seeking safety back to the countries they have fled, Amnesty International said in a new report today.

Amnesty’s 50-page report, Pushed into Harm’s Way, shows that large numbers of children are being forced back to dangerous situations without adequate screenings or protection from the dangers they may face on return.

US law requires that the Customs and Border Protection agency screen unaccompanied Mexican children in order to ensure they are not victims of trafficking or at risk of harm if returned. Yet, with the US authorities using an anti-trafficking law that allows them to repatriate children from Mexico or Canada, lawyers, representatives of children’s shelters and child welfare authorities in Mexico told Amnesty that the US still swiftly returns almost all unaccompanied Mexican children even when they are unsafe in Mexico and are seeking asylum in the USA.

During a trip to the region earlier this week, US Vice President Kamala Harris said that migrants from Guatemala would be “turned back” at the US border.

Children account for one in three migrants and asylum-seekers in the region - including many forced to cross separately from their asylum-seeking families after being turned away by the US border authorities. Since President Biden took office, about 50,000 unaccompanied migrant children have crossed into the USA in search of safety. According to the US authorities, some 80% of those unaccompanied children are trying to unite with family members in the USA, and about 20% are from Mexico.

“The Biden administration is summarily returning almost all unaccompanied Mexican children just hours after they seek safe haven, often without considering the risks they could face upon return.

“Likewise, Mexican authorities are deporting the vast majority of unaccompanied children from Central America to their home countries - often where they just fled threats or violence - even though most have family in the United States with whom they are trying to unite.

“These are dangerous and unconscionable policies.

“The United States and Mexico must stop denying unaccompanied children their universal human rights to seek asylum and to family unity, no matter where they’re from.”

Unaccompanied children from Central America have travelled with increasing frequency through Mexico to the USA since 2019, often to flee violence and reunite with families in the USA. In response, the Mexican immigration authorities have shut down the southern border and forcibly returned the vast majority of apprehended children - deporting 90% and 70% of Central American children taken into custody in 2019 and 2020 respectively.

This year, the Mexican immigration authorities have launched major operations in the north and south of Mexico to intercept and repatriate unaccompanied children. After such interceptions, child welfare authorities take custody of the children - often detaining them in closed shelters - and overwhelmingly determine that the “best interests” of the children are their forced return back to the countries from which they are fleeing.

Mexican child-protection authorities at the US-Mexico border told Amnesty that Mexico continues to deport as many as 85% of Central American children in some localities. According to national statistics, the Mexican authorities have reported deporting about half of the unaccompanied Central American children taken into custody nationwide during 2021. With the immigration status of many children yet to be resolved, deportation rates are likely to climb higher.

Since January, Mexican law has required that children be held in child welfare shelters instead of immigration detention facilities. Although this is a relatively positive step, these closed shelters have become overcrowded in northern Mexico, and processing times have increased from 15 days to as long as four months. Children should not be detained, and if they are, it must be for the shortest time possible in conditions that meet their best interests.