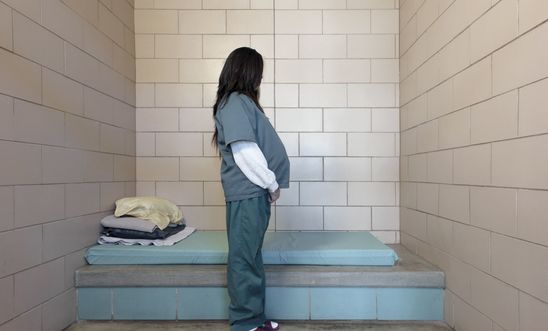 'If you test positive, bam, you’re slapped with a "chemical endangerment" charge', said one woman in Alabama © Richard Ross, richardross.net

A set of US laws which claim to promote maternal and infant health are in fact driving pregnant women away from vital health services, jeopardising their wellbeing and violating their right to health, according to a new report published by Amnesty International today.

The 70-page report, Criminalising Pregnancy: Policing Pregnant Women Who Use Drugs in the USA, highlights the impact of pregnancy criminalisation laws, especially those which are used to arrest and prosecute women who use drugs based on a belief that they are harming their fetuses. Fear of these laws is deterring pregnant women from accessing healthcare, prenatal care and even drug treatment.

The report focuses on the impact of the “chemical endangerment” law in Alabama - the state that has carried out the most prosecutions against pregnant women - and Tennessee’s “fetal assault” law, which between 2014 and 2016 made it a crime to give birth to a child showing symptoms of drug exposure.

In April 2014, Tennessee amended its “fetal assault law”, becoming the first US state to introduce a criminal law explicitly making it a crime to give birth to a child showing symptoms of prenatal exposure to narcotics. Amnesty has researched the impact of this law during the two years it was in effect.  Meanwhile, Alabama’s “chemical endangerment” law was passed in 2006 as a means to protect children from environments where they could be exposed to drugs or controlled substances. Individual prosecutors and the Alabama Supreme Court have interpreted the law to apply to pregnant women who use drugs.

One woman told Amnesty how she was charged under Alabama’s “chemical endangerment” law upon suspicion of using drugs, despite being unaware she was pregnant. Another described how the threat of punishment had deterred her from seeking healthcare: “In my town, I was worried about going to the doctor because if you test positive [for drugs], bam, you’re slapped with a ‘chemical endangerment’ charge.”

In Tennessee, one woman told Amnesty how she had given birth on the side of the road trying to avoid going to a hospital, where she feared prosecution under the “fetal assault” law. Although the “fetal assault” law in Tennessee ended in 2016, it is still in the state code and is likely to be introduced again. The same woman described how she subsequently spent months trying to find drug dependence treatment, but was unable to find any available services that would accept her insurance. Treatment costs are more than US$4,500 per year in Tennessee.

While Tennessee and Alabama are especially serious examples, most US states have some sort of “fetal assault” law in place, and the trend is growing. In the 2017 legislative session, states introduced more than 300 measures to restrict sexual and reproductive rights, emblematic of a dangerous and ongoing assault on women’s rights which has escalated during the first 100 days of the Trump administration.

“These laws put pregnant women in a double bind, forcing them to choose between risking their health and risking punishment.

“Drug dependence is a health condition but the US authorities are treating it as a crime, failing to ensure treatment is available for pregnant women and then punishing them for their ongoing condition. These harsh and discriminatory laws are making pregnancy more dangerous and trampling on human rights in the process.

“Across the USA, the heavy-handed policing of pregnant women’s behaviour is shattering patient trust in health services with devastating consequences.

“Women’s sexual and reproductive rights continue to be a battleground in the USA. The US authorities must look at the evidence and repeal or amend laws used to punish women for their actions during pregnancy - they are not working.

“Instead of policing women’s bodies, the authorities should be ensuring pregnant women have access to the prenatal healthcare and drug treatment programmes they are entitled to.”

Penalising the poor and women of colour

Amnesty’s report also found stark evidence of discrimination in the implementation of pregnancy criminalisation laws, which tend to be disproportionately enforced against low-income women and women of colour. These women are often already facing multiple levels of discrimination and do not have the resources to navigate the court system or child protection services. For this reason, women who have historically faced discrimination are at heightened risk of prosecution when they become pregnant. Drug testing is applied selectively, often based on discretionary “risk” factors such as low income. Some doctors admitted that their decisions about who to test were based on their own biases.

In some alarming cases, drug tests were carried out without women’s knowledge, representing a breach of their right to privacy. The director of a community corrections programme in Alabama, described the lack of a clear protocol on obtaining informed consent:

“All hospitals have different rules.  A lot of it is random. It’s not a real system. We’re kind of random here.”

Although the report focuses on women who have been punished for drug use, the promotion of punitive approaches over women’s health and rights has also led to women being prosecuted for refusing medical intervention or even for attempting suicide.