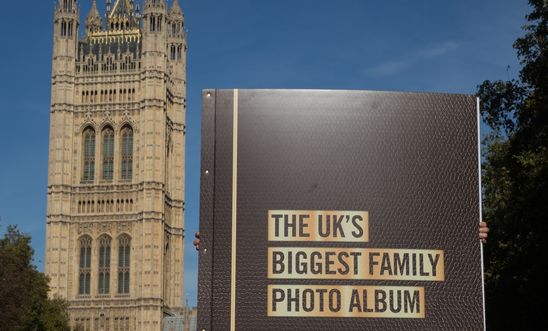 Amnesty International today (Wednesday 24 Oct) unveiled the ‘UK’s Biggest Family Photo Album’ at Westminster to celebrate family life in all its glory and show the Government that the UK wants refugees arriving on its shores to be able to reunite with their families.

The album, containing photos of just under 1,000 families, was created using submissions from every corner of the country as well as celebrities including Kate Moss and Edith Bowman. The precious moments shared – a family barbeque, a childhood holiday, time spent together across the generations or a candid moment of love  – are the kind which refugees living in the UK, separated from their closest relatives, miss every day.

The photo album will be presented to the home secretary Sajid Javid next month as a call to help reunite the mothers, fathers, brothers and sisters who have been torn apart from each other - giving them a chance to rebuild their lives and look forward to safe, happy futures together.

“This photo album is a wonderful celebration of 21st century family life and testimony to the deep-seated family values that can be found across the UK. The hundreds of photos we received are a clear sign that we want to be a country that welcomes refugees and one that strives to keep refugee families together.

“In addition to this, Amnesty now have more than 20,000 signatures on a petition calling on Sajid Javid to change the restrictive rules that keep refugees in the UK apart from those they love. It’s time for the Home Secretary to listen to these voices and allow refugee families to reunite and rebuild their lives together in the UK."

Earlier this year MPs  voted overwhelmingly in favour of changing the rules keeping refugee families apart. Sajid Javid has the power to change these rules with the strike of a pen.

#FamiliesTogether is a coalition of over 20 organisations working to secure refugee family  reunion in the UK including Amnesty International UK, British Red Cross, Oxfam, Refugee

This campaign is supported by the players of People’s Postcode Lottery.

Current UK rules are forcing families fleeing conflict to make impossible choices.  Children separated from parents or siblings, with no means to reunite. Easing the restrictive  rules will help refugees who have lost their homes, been separated from their families and all  that they know. Mothers, fathers, brothers and sisters who have been torn apart, lost everything and experienced so much, deserve a chance to rebuild their lives and have safe, happy futures together.

The  #FamiliesTogether coalition brings together more than 20 organisations to call for: