UK-made missile used in airstrike on ceramics factory in Yemen 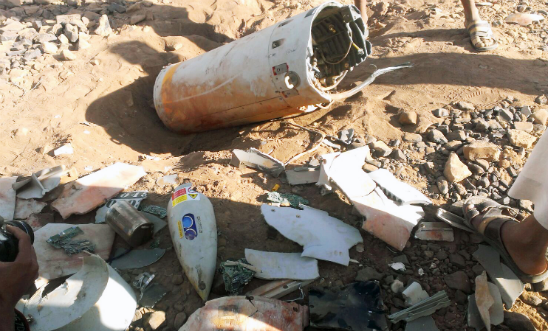 “This was depressingly predictable. Amnesty has repeatedly warned that UK-made weapons were likely to end up causing civilian casualties in Yemen, but those warnings have been recklessly ignored” - Kate Allen

The Saudi Arabia-led coalition used a British-made cruise missile to destroy a Yemeni ceramics factory, a civilian object, on 23 September 2015, Amnesty International and Human Rights Watch said today, based on field research and interviews with eyewitnesses at the scene.

The attack on the factory in the Sana’a governorate, which appeared to be producing only civilian goods, killed one person, and was in apparent violation of international humanitarian law.

This strike, using a British missile supplied in the 1990s, undermines the claim of British government ministers that the Saudi Arabia-led coalition use of UK military equipment is consistent with international humanitarian law, and that the UK monitors such compliance “very carefully”. The organisations are unaware of any credible coalition investigation into this incident, nor any other investigations into other apparently unlawful airstrikes for possible violations of international humanitarian law.

'This was depressingly predictable. Amnesty has repeatedly warned that UK-made weapons were likely to end up causing civilian casualties in Yemen, but those warnings have been recklessly ignored and civilians have paid the price for that complacency.

'More than 2,000 civilians have been killed in airstrikes on Yemen so far.

'The UK is now bound by the Arms Trade Treaty, therefore what is now needed is an immediate stop on UK arms transfers to the Saudi-led coalition that risk being used in the Yemen conflict, a comprehensive investigation into current UK arms transfers and guarantees that we won’t be selling further weapons which contribute to violations of international law.

“It’s completely unacceptable to wait for civilian casualties to pile up before acknowledging the risk, that’s simply not how arms controls are meant to work.'

All countries have legal responsibilities under international law to control the transfer of weapons and to restrict or prohibit their transfer in certain circumstances. The UK is a party to the Arms Trade Treaty (ATT), and played a leading role in its establishment. It came into force in late 2014. Under article 6 of the treaty, a country is prohibited from authorising an arms transfer if it has knowledge at the time of authorisation that the arms would be used in the commission of “attacks directed against civilian objects or civilians protected as such, or other war crimes as defined by international agreements to which it is a Party.” Further, article 7 of the ATT requires that states assess the potential that the arms being exported could be used to commit a serious violation of international human rights or humanitarian law; if there is an overriding risk of this, their export shall not be authorised.

As it is now evident that there is such a risk, the UK and all other countries that supply arms to the members of the Saudi Arabia-led coalition should suspend all transfers of weapons that pose a substantial risk of being used in unlawful airstrikes in Yemen, particularly air-to-ground munitions, Amnesty International and Human Rights Watch said.

Amnesty’s UK Director Kate Allen has today written to Foreign Secretary Phillip Hammond calling for immediate end to UK arms transfers to the Saudi-led coalition that risk being used in the Yemen conflict, a comprehensive investigation into current UK arms transfers and guarantees that further weapons which contribute to violations of international law, will not be sold.

'The latest revelations show UK policy to be both misleading and seriously ineffective. Despite multiple, well-documented cases of violations of the laws of war by the Gulf coalition in Yemen, UK Ministers have consistently refused to acknowledge this.

'The UK should suspend further sales of aerial munitions to coalition members pending a thorough investigation into this case, and other apparently unlawful air strikes.'

Amnesty and Human Rights Watch have examined the weapon remnants at the 23 September strike site and identified the munition used as PGM-500 ‘Hakim’ air-launched cruise missile, supplied in the mid-1990s and manufactured by the UK firm Marconi Dynamics. The analysis compared fragments photographed at the strike site with unexploded remnants of the same missile type from a separate strike and found both were consistent with the deployment of an air-launched PGM-500 ‘Hakim’. The other recorded strike using this type of cruise missile hit an open field on 4 or 5 November in Sahar in Sa’da governorate in northern Yemen and did not result in any known casualties.

Marconi markings are clearly visible on a component part recovered from the Sana’a strike site. Stocks of this missile are in service with the United Arab Emirates (UAE) Air Force, which has the capability to fire them from both Mirage 2000s and F-16F aircraft.

During its on-site investigation Amnesty did not observe any evidence that would indicate that the factory had been used for a military purpose. The organisation observed that the area directly surrounding the factory compound appeared to be residential and that it was next to a hospital, which was hit on 26 September.

The strikes on the factory caused minor damage to the hospital. Amnesty visited the hospital on 6 November and observed the damage and spoke with staff who had been there during the strike.

The owners of the ceramic factory, which opened in 1994, said that it was the only such facility in the country, and employed around 330 workers, primarily from the village of Matna. However its owners said they were forced to stop operations in April due to security fears for its staff and difficulties obtaining fuel to operate machinery.

An independent international inquiry should be established to investigate alleged violations by all parties to the conflict in Yemen, establish the facts, and identify those responsible for violations with a view to ensuring that they are held accountable.

Amnesty visited the Sana’a strike site on 6 November and they, as well as Human Rights Watch, later interviewed one of the factory owners and other witnesses to the strike.

The airstrike took place between 11-11:30 a.m. on 23 September in the village of Matna in Beni Matar district, west of Sana’a. Witnesses and one of the factory owners said that four missiles hit the Radfan Ceramics Factory in quick succession.

Ibrahim Ghaleb Mohammad al-Sawary, the son of one of the factory directors, who was in the vicinity during the attack, said: “I was getting ready to pray, leaning back on the wall of the factory when suddenly I heard whizzing followed by a very loud explosion. I started running away but less than two minutes later we heard the second explosion. I saw people running away from their homes – kids, older people and young people – all of them scared like us and running away without knowing where.”

He later returned to the factory, which had smoke rising from it and was in a state of ruin, particularly the section with heavy machines used to heat and press the ceramics, which was entirely destroyed.

One man in the vicinity, Yahya Abd al-Karim al-Sawary, 28, was killed by shrapnel as he was fleeing the area. A local resident who asked to remain anonymous reported that the victim had been working as a guard at a makeshift detention facility run by Ansarullah, the political wing of the Huthis, a Zaidi Shi’a armed group in northern Yemen.  The site had originally been a government building known as the Productive Families Center, approximately 140 meters from the factory compound. The airstrikes did not hit the detention facility.

Ali Ahmad al-Faqih, 55, who was injured in the attack, said that he had been on a motorbike trying to check on his family who live next to the factory during a brief lull between airstrikes – not realising the attack had not finished: “I heard a whizz and knew it was a rocket coming,” he said. “I lay down and prayed out loud. I saw all my body covered in blood.” Al-Faqih was later taken to private hospital, where he underwent surgery to remove shrapnel from his chest.

Another local resident told Human Rights Watch that a second civilian, Elham Hussein Hussein Taher, a 14-year-old girl who lived near the factory, was also injured in the attack.

Ghalib Muhammad al-Sawary, one of the factory owners, told Amnesty International that the factory had never been used for any military purpose. Other witnesses told Human Rights Watch that no fighters or military vehicles were in or near the factory at the time of the attack.