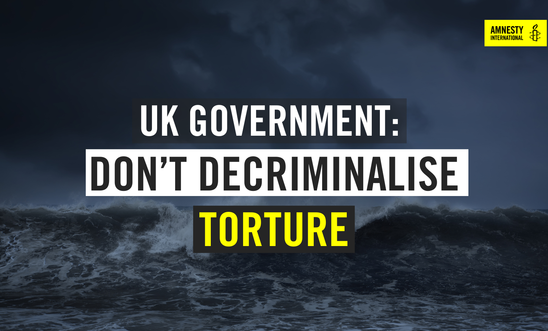 ‘The UK’s international reputation is at stake’ - Kate Allen

The House of Lords should reject provisions in the controversial Overseas Operations Bill which grant a ‘licence to torture’ to British troops abroad, Amnesty International said today.

Amnesty’s call comes as it published a YouGov poll showing that a majority of people in the UK would have concerns about the prospect of UK troops receiving immunity from prosecution for war crimes.

The bill, which is due for its second reading in the House of Lords later today, has proved highly controversial, with critics including former government ministers and military figures.

In November, MPs voted to reject attempts by Conservative former Cabinet minister David Davis and the SNP to ensure the bill’s provisions blocking prosecutions would not apply to torture or genocide.

In its present form, the bill would drastically restrict the possibility of prosecutions being brought against UK soldiers for torture and war crimes committed overseas by introducing a ‘triple lock’ of a “statutory presumption against prosecution” after five years and further hurdles on top of the normal criminal justice process. Its apparent intention is to stop prosecutors from mounting otherwise legitimate cases, effectively putting troops beyond the reach of the law.

The Amnesty-commissioned survey shows that more than half of those polled (56%) expressed concern at the prospect of British troops being given immunity from prosecution, with around a third (29%) very concerned and only 13% not at all concerned. Three quarters (75%) of those polled also said they believe torture is unacceptable, while around two-thirds (62%) thought granting immunity to British soldiers would make it harder for the UK to call on other countries to bring charges for war crimes committed by their armies.

The bill has been strongly criticised from numerous quarters, including by senior military figures and former Defence Secretary Sir Malcolm Rifkind and former Attorney-General Dominic Grieve. The Government claims the legislation is needed to prevent “vexatious” prosecutions and is popular among the public - something YouGov’s poll implies may be a flawed assumption. The Government has been unable to provide evidence of “vexatious” prosecutions[1] and has conceded to the Joint Committee on Human Rights that of 27 prosecutions brought since 2000 none were deemed unmeritorious or vexatious.

As part of Amnesty’s campaign against the bill (www.amnesty.org.uk/warcrimes), more than 20,000 people have emailed Defence Secretary Ben Wallace calling on him to urgently drop the controversial immunity provisions.

“This polling clearly shows that the UK public does not believe British soldiers should be above the law or given a free pass for war crimes.

“The Government has tried to sell this shockingly unprincipled law using a spurious argument about ‘vexatious’ claims that would amount to granting defacto immunity for acts of torture and other serious crimes after five years.

“The UK’s international reputation is at stake - this would make terrible law and set a terrible example.

“The House of Lords should oppose this shameful bill and ensure that British troops are not granted a licence to torture.”

The YouGov poll also explored public awareness of one of the most horrific cases of abuse of an individual by British forces and found that recognition was low. The vast majority (88%) of respondents reported that they had never heard of Baha Mousa.

Baha Mousa was a 26-year-old Iraqi hotel receptionist from Basra who was beaten to death while in the custody of British soldiers in 2003.  In 2007, British soldier Donald Payne was convicted of inhumane treatment toward Mousa, though he was acquitted of manslaughter. His ten co-defendants were completely acquitted. Other detainees held alongside Mousa have said UK soldiers competed to see who could kick prisoners the furthest, while a judge in the case said there had been “a more or less obvious closing of ranks”.

[1]During a 5 October session of the Joint Committee on Human Rights, Joanna Cherry QC MP asked how many of the 27 prosecutions  since 2000 had received judicial comment indicating they were unmeritorious or vexatious. In response, MoD Minister Johnny Mercer conceded he was not aware that any had.

All poll figures, unless otherwise stated, are from YouGov Plc. Total sample size was 1,707 adults. Fieldwork was undertaken between 28-29 October 2020. The survey was carried out online. The figures have been weighted and are representative of all UK adults (aged 18+).  The full results are available here on YouGov’s site.