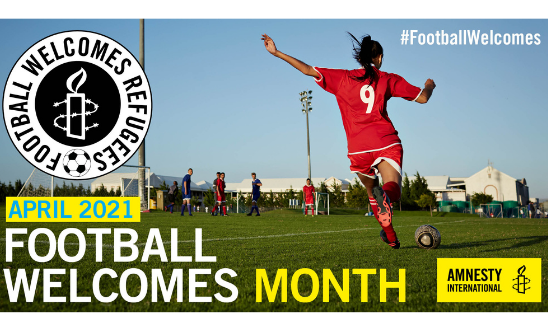 Now in its fifth year, Football Welcomes, supported by players of the People’s Postcode Lottery, celebrates the contribution players from a refugee background make to the game, and highlights the role football can play in creating more welcoming communities for refugees.

From Leicester City to Liverpool, Manchester United to Middlesbrough and Sunderland to Swansea City, football clubs, community trusts, County FAs and others will be putting on events and activities to show their solidarity with refugees over the coming month.

Some will offer a training session, a match or Soccercise classes for refugees, some will incorporate learning about refugee rights into their work in schools, while others will have first team players warming up in Football Welcomes t-shirts and help to raise awareness online.

The return of outdoor participation sport provides a much-needed opportunity for people to reconnect with each other and their communities and to improve mental and physical health.

"When I came to the UK from Nigeria 19 years ago it was the most difficult time of my life. I played football and it helped me to learn English, meet people and start to rebuild my life here, and I want everyone who has had to flee conflict and persecution to benefit from football in the same way.

“The team have really missed playing over the last year. When you’re in the asylum system it can be stressful and isolating, and my team-mates say what a difference it makes to just be able to play football. When you’re on the pitch you’re simply a footballer, you can forget the stresses and anxiety of day-to-day life, make friends and feel connected to the community.”

Football Welcomes is taking place against backdrop of government plans, announced last week, that threaten to fatally dismantle the UK's asylum system and the protection it provides to thousands of people. Amnesty is deeply concerned about the impact this will have on those fleeing conflict and persecution and their ability to find safety in the UK.

“The impact of the pandemic combined with the government’s new asylum proposals mean it’s more important than ever that communities come together to show solidarity with refugees and people seeking asylum.

“It’s great that despite the challenges of getting grassroots football up and running again as lockdown eases, so many clubs have signed up to take part this year.

“The game can be a powerful force for good, bringing people together and a providing a sense of purpose and belonging. For those who’ve fled conflict and persecution and had to leave everything behind, this is incredibly important.

“It’s heartening to see football clubs across the country doing great work in their communities to show there is more that unites us than divides us.”