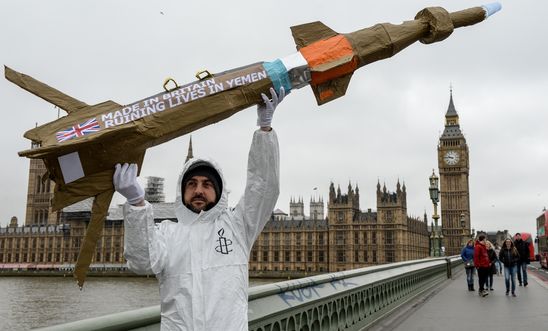 Amnesty International, Human Rights Watch and Rights Watch UK will be intervening in a fresh legal challenge over the UK’s arms sales to Saudi Arabia.

The case, which was originally brought by Campaign Against the Arms Trade (CAAT), is seeking to test the legality of the Government’s decision to issue licences for arms exports to Saudi Arabia despite the risk of the weapons being misused in the conflict in Yemen.

Last year the High Court in London dismissed CAAT’s case, which had argued that arms transfers to Saudi Arabia should be halted because of the clear risk that the weapons supplied would be used to commit serious violations of international humanitarian law in Yemen. Among other things, the ruling (paragraph 209) discussed the significance of the “finely-balanced” nature of the decision said to be confronting officials and ministers.

Having been given permission to appeal the ruling, CAAT’s case will now be heard by the Court of Appeal in April 2019. Amnesty International, Human Rights Watch and Rights Watch UK will all be making expert submissions in the CAAT case.

Since a Saudi Arabia-led military coalition entered the Yemen conflict in March 2015, more than 7,500 Yemeni civilians have been killed and another 10,000 injured. The United Nations assesses that the majority of casualties have been the result of coalition bombing.

“We strongly believe the UK’s sale of arms to Saudi Arabia is in clear breach of both the UK’s own law and international law.

“The risk of UK arms sold to Saudi Arabia being used in unlawful attacks in Yemen could hardly be much starker.

“Extensive and credible reports, including our own research on the ground in Yemen, have demonstrated that such weapons have been used to commit serious violations, including war crimes - against civilians in Yemen, and that, in light of the clear risk, authorising further exports would be counter to the UK’s obligations under international law.

“It shouldn’t need a legal challenge to get ministers to halt arms sales to Saudi Arabia, but it seems to be the only way to get the Government to finally do the right thing.”

In late 2017, Amnesty Greece led protests against the proposed transfer of 300,000 tank shells from Greece to Saudi Arabia because of the significant risk they could be used for serious violations of international humanitarian law in Yemen. As a result, a parliamentary committee cancelled the deal. In January this year, Norway suspended supplies of lethal equipment to the UAE, citing concerns over the situation in Yemen. In April, Germany’s incoming coalition government announced it would suspend future licences for arms transfers to countries directly engaged in the Yemen conflict. Germany recently restated this position in light of the killing of Jamal Khashoggi and urged other EU member states to do the same.

All sides have committed violations

Amnesty and others have documented how all sides to the conflict in Yemen have committed serious breaches of international humanitarian law, including possible war crimes. This includes the Huthi armed group and allied forces which, amongst other things, have indiscriminately fired explosive munitions with wide-area effects - including mortars and artillery shells - into residential areas killing and injuring civilians.