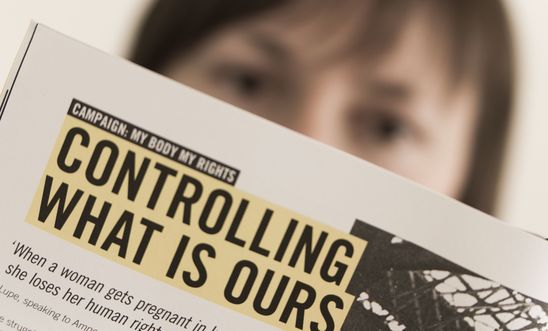 The Irish government is under growing pressure to reform its anti-abortion law, one of the most restrictive in the world, Amnesty International said today, as it published results of an opinion poll on public attitudes to abortion in Ireland.

The poll carried out for Amnesty by RED C Research and Marketing, shows that the majority of people in Ireland are not aware that abortion is a criminal offence. The vast majority disagree with the current criminal sanctions for women who have abortions, or doctors who provide abortions.

Asked whether the Irish government should decriminalise abortion, 67% agreed and 25% disagreed. In addition, 81% said they are in favour of significantly widening the grounds for legal abortion access in Ireland.

“Ireland’s abortion laws are failing women and this poll shows that they are also utterly out of step with public opinion.

“Every year thousands of women are forced to leave Ireland and make a stressful, and often expensive journey, simply to access healthcare to which they should be entitled.  It’s time the Irish government stopped shirking its responsibility towards women’s health and put the issue to a referendum.”

“It is clear that Irish views on abortion have undergone a major transformation. People in Ireland are now, on the whole, more understanding of the situations women find themselves in and firmly believe that women should not be criminalised for having an abortion

“This poll demonstrates that on the issue of abortion Ireland’s people are clearly ahead of their government leaders. The Irish government should put this issue to the people as a matter of priority. Decriminalising abortion is not only a human rights obligation – it is what people in Ireland want. And this means repealing the 8th Amendment.”

Headline figures are as follows:

The poll also found that 70% of respondents agree that women have an international human right to an abortion when their pregnancy is a result of rape or incest, where their life or health is at risk, or in cases of fatal foetal impairment.