Turkey: Jailing of activists, including Amnesty director, a crushing blow for rights 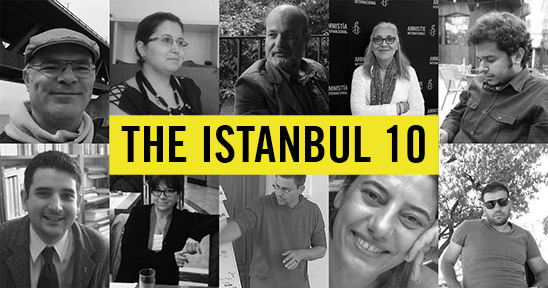 The remanding of six human rights defenders in pre-trial custody is an appalling affront to justice and a new low in Turkey’s post-coup crackdown, said Amnesty International.

Amnesty International Turkey’s Director, Idil Eser who was among those remanded in custody, was detained alongside nine other human rights defenders on 5 July whilst attending a routine workshop. Four of them were released on bail in the early hours of this morning but are still under investigation. All ten are suspected of ‘committing crimes in the name of a terrorist organisation without being a member'. The six who were remanded in custody join Amnesty Turkey’s Chair, Taner Kiliç, behind bars.

“This is profoundly worrying news. The last place my extremely dedicated colleague and friend Idil should be is behind bars.

“Like so many others caught up in Turkey’s terrifying crackdown, Idil and her fellow human rights activists are facing completely unfounded charges.

“The UK along with governments around the world must do more and publicly demand Idil and her colleagues’ immediate release.

“President Erdoğan needs to hear a clear message over halting his country’s descent into ever-greater authoritarianism.

“We cannot stand by as a complete collapse of human rights in Turkey unfolds before our very eyes.”

“Turkish prosecutors have had 12 days to establish the obvious: that these ten activists are innocent. The decision to proceed shows that truth and justice have become total strangers in Turkey.

“This is not a legitimate investigation, this is a politically motivated witch-hunt that charts a frightening future for rights in Turkey.”

The bizarre accusations include attempts to link Idil Eser with three unrelated and opposing terrorist organisations through her work for Amnesty. The prosecutor's request that she be remanded in pre-trial prison custody references two campaigns by Amnesty, neither of which were authored by Amnesty Turkey, one of which was conducted before she joined the organisation.

An accusation levelled against İlknur Üstün of the Women's Coalition, who was released on bail, is that she requested funding from “an embassy” to support a project on “gender equality, participation in policy making and reporting”.

“Today we have learnt that standing up for human rights has become a crime in Turkey. This is a moment of truth, for Turkey and for the international community.

“Leaders around the world must stop biting their tongues and acting as if they can continue business as usual. They must bring pressure to bear on Turkish authorities to drop the investigation and to immediately and unconditionally release the rights defenders.”

Taner Kiliç was detained on 6 June. He was charged three days later with “membership of the Fethullah Gülen Terrorist Organization” and remanded in pre-trial detention despite no credible evidence being presented against him. Taner Kiliç has served on the board of Amnesty Turkey for various periods since 2002 and has been Chair since 2014. During his decades of work for human rights organisations in Turkey he has consistently demonstrated an unswerving commitment to human rights.