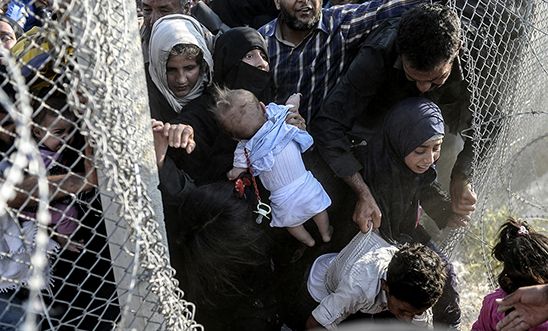 Large-scale forced returns of refugees from Turkey to war-ravaged Syria expose the fatal flaws in a refugee deal signed between Turkey and the European Union earlier this month, Amnesty International revealed today.

New research carried out Amnesty in Turkey’s southern border provinces suggests that Turkish authorities have been rounding up and expelling groups of around 100 Syrian men, women and children to Syria on a near-daily basis since mid-January. Over three days last week, Amnesty researchers gathered multiple testimonies of large-scale returns from Hatay province, confirming a practice that is an open secret in the region. All forced returns to Syria are illegal under Turkish, EU and international law.

The publication of the findings comes a day after reports from the Syrian Observatory for Human Rights that Turkish border forces have shot refugees dead as they fled the conflict in Syria.

“In their desperation to seal their borders, EU leaders have wilfully ignored the simplest of facts: Turkey is not a safe country for Syrian refugees and is getting less safe by the day.

“The large-scale returns of Syrian refugees we have documented highlight the fatal flaws in the EU-Turkey deal. It is a deal that can only be implemented with the hardest of hearts and a blithe disregard for international law.”

The EU-Turkey deal paves the way for the immediate return to Turkey of Syrian refugees arriving on the Greek islands, on the grounds that it is safe country of asylum. EU officials have expressed the hope that returns could start as of Monday 4 April.

The EU’s extended courting of Turkey that preceded the deal has already had disastrous knock-on effects on Turkey’s own policies towards Syrian refugees.

“Far from pressuring Turkey to improve the protection it offers Syrian refugees, the EU is in fact incentivising the opposite.

“It seems highly likely that Turkey has returned several thousand refugees to Syria in the last seven to nine weeks. If the agreement proceeds as planned, there is a very real risk that some of those the EU sends back to Turkey will suffer the same fate.”

Children and a pregnant woman among those returned

One of the cases uncovered by Amnesty is of three young children forced back into Syria without their parents; another is of the forced return of an eight-month pregnant woman.

“The inhumanity and scale of the returns is truly shocking; Turkey should stop them immediately.”

Many of those returned to Syria appear to be unregistered refugees, though Amnesty International has also documented cases of registered Syrians being returned, when apprehended without their papers on them.

Amnesty’s recent research also shows that the Turkish authorities have scaled back the registration of Syrian refugees in the southern border provinces.

Registration is required to access basic services. In Gaziantep, Amnesty International met with the son of a woman requiring emergency surgery to save her life but who was denied the ability to register – and therefore have the surgery. She eventually was able to register elsewhere and receive the life-saving treatment.

According to other Syrian refugees in the border province of Hatay, some people attempting to register have been detained and forced back into Syria, together with refugees found without their registration documents.

Amnesty spoke to a family of unregistered Syrian refugees in Hatay province who have opted to remain in their apartment rather than trying to register, for fear they will be returned to Syria.

There are currently around 200,000 displaced people within 20km of Turkey’s border. According to humanitarian aid groups as well as camp residents, conditions in camps close to the border are abysmal, without clean water or sanitation. A camp resident reported kidnappings for ransom among the dangers.

Increased border security and the lack of any regular means of crossing have pushed people into the hands of smugglers, who are demanding at least US$1,000 per person to take people into Turkey, according to the Syrian nationals Amnesty researchers spoke to on both sides of the border.

The increasingly restrictive border policies are a radical change from those adopted previously by the Turkish authorities during the five years of the Syrian crisis. Previously, Syrian residents with passports had been able to cross at regular border gates, and those who entered irregularly – the vast majority – were also able to register with the Turkish authorities.

“Over the last few months, Turkey has introduced visa requirements for Syrians arriving by air, sealed its land border with Syria for all but those in need of emergency medical care, and shot at some of those attempting to cross it irregularly.

A Syrian family whose children were forcibly returned to Syria

An extended family of 24 people lived together in a single apartment in Antakya, Hatay province. They told Amnesty International that five members of their family were forcibly returned to Syria on or around 20 February 2016.

Thirty-year-old M.Z., in Turkey since early 2015, had been able to register. His 20-year-old brother, M.A., and their 11-year-old nephew and two nieces, aged 10 and nine, had arrived in Turkey around two months previously and had not been able to register because they had been told that it was impossible, and that those who tried risked being sent back to Syria.

The two brothers were taking their nephew and nieces to the park to play when they were stopped by police, who demanded their identification papers. The police took all five Syrian refugees to a nearby police station.

Z.Z. – another of M.Z.’s brothers who lived with them in Antakya – told Amnesty International that after learning of their detention, he brought M.Z.’s registration card to the police station, but that the police refused to release any of them.

M.Z. told Amnesty International by phone from Syria that after being detained for a few hours, all five refugees were put on a bus and driven to the Cilvegözü / Bab al-Hawa border crossing in Hatay province.

They were not alone. M.Z. said that there were a total of seven buses, with about 30 people on each bus – mostly families – representing up to 210 Syrian refugees. Two police cars accompanied the buses, and M.Z. told Amnesty International that on his bus there was a Turkish soldier armed with an assault rifle.

M.Z.’s brother followed the buses to Bab al-Hawa but said he was not permitted to speak to his relatives. When they reached the border at about 3am, they were handed over to the Ahrar al Sham armed group. On the Syrian side, M.Z. told a soldier that he had no money to care for the three children. The soldier then drove them to Atma refugee camp, in Syria’s Idlib province.

M.Z. does not know what happened to the other people on the buses. He describes conditions in the Atma camp as atrocious, with no running water or sanitation facilities and completely inadequate food supplies.

M.Z. said that the children have developed skin conditions and that since being in Atma his nephew has developed vision problems.

The five Syrians are still able to communicate with their family in Antakya by phone. The children’s mother told Amnesty, “They are crying all the time; when they talk I can’t even understand what they are saying.”

Aid groups reported in December 2015 that nearly 58,000 people were living in Atma camp. M.Z. told Amnesty International that he has tried to return to Turkey several times over the past month.

M.Z.’s family in Antakya told Amnesty International that smugglers would charge them about US$1,000 per person to cross, but M.Z. says he only has around 500 Syrian pounds (just over US$2).

The two brothers said that around 3 March 2016, they were travelling in two cars with their brother and his wife, having crossed the Turkey-Syria border near Yayladağı in Hatay province the same day. About 3km into Turkish territory, Turkish border guards stopped the car in which their brother K.A. and his wife B.Q. were travelling. K.A. phoned his two brothers in the other car to tell them what had happened.

The two men explained to Amnesty International that their brother and sister-in-law were sent back to Syria in a van to the Cilvegözü / Bab al-Hawa border crossing in Hatay province, along with seven other vans carrying Syrian refugees. Each van allegedly transported around 14 people, which represents around 112 Syrian refugees. The brother and his now nine-month pregnant wife are living in Atma camp across from the Turkish border.

A Syrian man said his mother had not been permitted to register in Gaziantep, despite urgently requiring life-saving surgery that could only be accessed with registration.

A doctor had told him that every day that passed without the surgery would endanger his mother’s life. After two weeks of trying to register in Gaziantep, showing numerous medical test results as proof of the urgency of the situation, they gave up and instead convinced the authorities to register her in Kilis, some 60km away. The mother was subsequently able to receive the free medical care she required.

The man had been part of a group of around 60 people trying to cross irregularly to Turkey on 20 February 2016. He said that they were apprehended by Turkish border guards and detained in a military barracks near Reyhanlı in Hatay province.

He told Amnesty he was detained for four hours, and that other people in the barracks (including women and children) were detained for up to 24 hours. He said that the border guards did not provide any food or water, nor access to toilets.