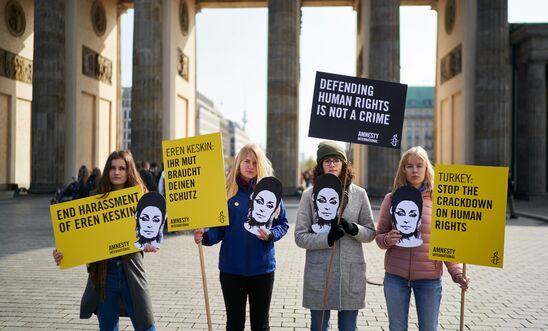 ’I have been prosecuted many times and jailed for my thoughts. I’m still here. I’m not going anywhere’ - Eren Keskin

Amnesty International has condemned the sentencing of four Turkish human rights defenders on “terrorism-related” in a case involving Özgür Gündem - a daily newspaper that was closed down in 2016.

Eren Keskin, a prominent human rights defender and lawyer in Turkey - was sentenced to six years in jail for supposed “membership of an armed terrorist organisation”.

Zana Kaya, the newspaper's editor-in-chief was sentenced to one year and 13 months in prison for "making propaganda for a terrorist organisation."

Özgür Gündem’s former publisher, Kemal Sancılı and the newspaper’s managing editor İnan Kızılkaya have been sentenced to six years and three months in prison for “being a member of an armed terrorist organisation” - the same sentence as Eren Keskin’s.

All four remain at liberty pending their appeals.

“Today a human rights lawyer who has spoken out against injustice for more than three decades, has become the victim of injustice herself.

“Eren Keskin has dedicated her life to defending the rights of women, prisoners and fought for justice for the families of the disappeared. This verdict is yet another shocking example of anti-terrorism laws being used to criminalise legitimate, peaceful activities.

“’I have been prosecuted many times and jailed for my thoughts. I’m still here. I’m not going anywhere,’ Eren Keskin tweeted after she was sentenced.

“Amnesty International is not going anywhere either.”