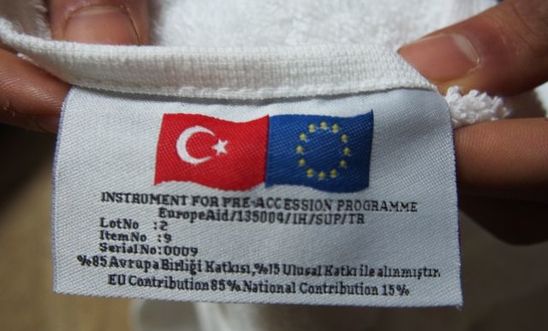 Label on a towel label at Erzurum Deportation Centre in Turkey, from where refugees have been sent back to Syria © Amnesty International

“When they put a chain over your hands and legs, you feel like a slave, like you are not a human being,” Syrian refugee

The report Europe’s Gatekeeper exposes the recklessness of the EU doing deals with third countries without taking steps to ensure human rights obligations will be met. It documents how, since September, in parallel with EU-Turkey migration talks, the Turkish authorities have rounded up and herded scores – possibly hundreds – of refugees and asylum-seekers onto buses and transported them more than 1,000 kilometres to isolated detention centres where they have been held incommunicado. Some report being shackled for days on end, beaten and forcibly transported back to the countries they had fled, even into the hands of armed groups.

The findings of the report also emphasise the folly of the UK government’s position that nearly all refugees can and should be hosted in crisis regions. Unless richer countries like the UK share responsibility for refugees, the situation in those regions will remain unsustainable for both refugees and the generally poorer countries hosting them.

“We have documented the arbitrary detention of some of the most vulnerable people on Turkish soil. Pressuring refugees and asylum-seekers to return to countries like Syria and Iraq is not only unconscionable, but it’s also in direct breach of international law.

“By engaging Turkey as a gatekeeper for Europe in the refugee crisis, the EU is in danger of ignoring and now encouraging serious human rights violations. EU-Turkey migration-related cooperation should cease until such violations are investigated and ended.”

This apparent policy shift is a new development and contrasts with the generally favourable, humanitarian approach of the Turkish authorities towards refugees and asylum-seekers. Turkey hosts the largest refugee population in the world, with about 2.2 million registered refugees from Syria and approximately 230,000 asylum-seekers from other countries.

As part of the EU-Turkey migration deal (Action Plan) signed in last month, the EU made a 3bn Euro (£2.17bn GBP) pledge to improve the humanitarian situation for refugees and asylum-seekers in the country, while Turkey committed to strengthening measures to restrict the flow of migrants and refugees towards the EU. Further talks on EU-Turkey relations and the Action Plan are ongoing this week in the run up to the European Summit on Thursday.

While the EU is increasingly anxious to ensure Turkish cooperation in reducing irregular migration, it is allowing its funds to be used for equipment and infrastructure in facilities from which refugees and asylum-seekers are being unlawfully pressured to return to countries like Syria and Iraq. Refugees held in the Erzurum detention centre showed Amnesty staff the labels attached to beds and cupboards advertising the centre’s funding under an EU pre-accession programme.

EU officials in Ankara confirmed to Amnesty that the six EU-funded open reception centres outlined in the draft Action Plan on 6 October will actually be detention centres.

“It is shocking that EU money is being used to fund an unlawful detention and return programme. The EU must ensure that its funding and migration cooperation with Turkey promotes rather than undermines the rights of refugees and migrants.”

All of the detained refugees and asylum-seekers told Amnesty they were taken into custody in Turkey’s western border provinces, including Edirne and Muğla, before being driven to outposts in the south or east. Most of them said that they were intending or attempting to cross irregularly to the EU.

Refugees and asylum-seekers were detained without explanation or legal grounds in a camp in Düziçi in Osmaniye province or in the Erzurum Removal Centre in Erzurum province for up to two months. They were denied contact with the outside world, including to lawyers or their families; the only way people were able to communicate was through the use of mobile phones hidden from the authorities.

One Syrian man living in Turkey embarked on a 23-hour bus journey to the Erzurum Removal Centre after his daughter managed to contact him from a concealed phone. However, he was told by authorities upon arrival that they could neither confirm nor deny whether she was actually in the centre.

Removal Centre for seven days with his hands and feet shackled.

“When they put a chain over your hands and legs, you feel like a slave, like you are not a human being,” he told Amnesty researchers.

For many, the harrowing experience of unlawful detention was followed by deportation to Syria or Iraq after being pressured to sign documents in Turkish, which they did not understand.

Refugees and asylum-seekers told Amnesty that the only way they could leave the facilities was to agree to return to where they came from. In Erzurum, a three-year-old child was forced to provide his fingerprints as evidence of his consent to return to Syria, a 23-year-old Syrian man told Amnesty.

While researchers have documented more than one hundred forcible returns to Syria and Iraq from Turkey in recent months, it is feared that the actual number was far higher and included deportations to Afghanistan.

“There is a total lack of transparency surrounding these cases and the real number of arbitrary detentions and unlawful deportations carried out by the Turkish authorities is unknown. This new practice must be investigated immediately to protect all refugees and asylum-seekers in Turkey.”

Amnesty is calling on Turkey to end unlawful detentions and deportations. The EU and Turkey should establish effective independent monitoring mechanisms to review human rights compliance of the EU-Turkey Action Plan and the use of EU funds for migration-related detention purposes. Until these measures are in place, implementation of the Action Plan should be suspended.