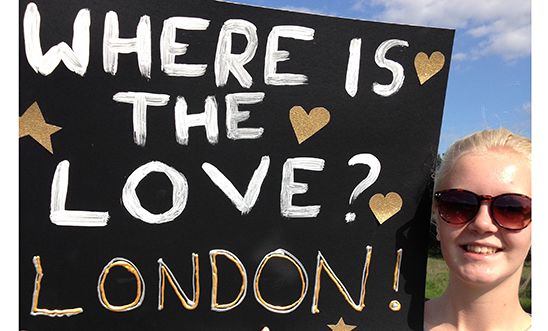 More than 80,000 people are expected to take part in a Solidarity with Refugees demonstration in London on Saturday (12 September) calling on David Cameron to take effective action to turn the refugee crisis around and accept the UK’s fair share of refugees already in Europe.

Amnesty will be towards the front of the demonstration, which will leave from Achilles Way, Park Lane (southbound carriageway) in central London at 13.00, and end at Parliament Square. Amnesty is inviting people to march under its banner and placards saying ‘Refugees Welcome’ will be available for people to carry.

From 12.00 there will be speakers addressing the crowd in Achilles Way. There will music in Parliament Square at 14.00, and speeches there from 14.45 -16.00. Amnesty UK director Kate Allen will address the march between 15.00 and 16.00. Other speakers include Liberal Democrat leader Tim Farron, Green Party leader Nathalie Bennett, and representatives of refugee organisations and other NGOs.

The demonstration comes after 1.4 million people have signed petitions, written to their MPs or tweeted photos of themselves supporting the #refugeeswelcome campaign in the last week. It takes place ahead of a critical EU meeting in Brussels on Monday (14 Sept) which Home Secretary Teresa May will attend to discuss a response to the crisis.

The huge outpouring from the British public of compassion for people fleeing conflict and persecution and looking for safety in Europe, and of anger at the UK government’s lack of leadership on the crisis so far, forced David Cameron into a U-turn on Monday. After having said there would be no significant increase in the pitiful number of 216 Syrians resettled in the UK so far, he announced that the UK will take in 20,000 people over the next four years from camps on Syria’s borders.

However, while this is a step in the right direction, it does not address the refugee crisis facing Europe right now. Hundreds of thousands of refugees are already in Europe and European countries need to work together and each take in their fair share of people – from countries like Eritrea and Afghanistan, as well as Syria – looking for safety.

“This is a critical moment ahead of the EU meeting on Monday to make our voices heard loud and clear. We should remember the proud moments in the UK’s history when we have opened our doors to people when they were most in need. We should not be turning our backs now on those caught up in what has become the biggest refugee crisis since the Second World War.

“Join us on the march to tell the government that the UK can and must do better. If we are to play our part in turning this crisis around, the home secretary must go to the EU meeting on Monday and sign up to a comprehensive, pan-European response that includes taking in the UK’s fair share of refugees already in Europe, saving lives at sea, tackling people smuggling and helping to resolve the conflicts and crises that are forcing people to flee.”

A demonstration calling on Prime Minster David Cameron to accept the UK’s fair share of refugees and join a Europe-wide effort to turn the refugee crisis around, ahead of a key EU leaders meeting on Monday (14 Sept).

There will be stewards in Amnesty tabards at Hyde Park Corner and Marble Arch Tube stations directing people to Amnesty’s meeting point from 11.30.

13.00: The march sets off, following the southbound carriageway of Park Lane, towards Parliament Square

15.00 – 16.00: Rally in Parliament Square. Amnesty UK director Kate Allen will address the demonstration, along with other speakers.

Amnesty is encouraging people to keep their placards after the march and put them up in their windows.