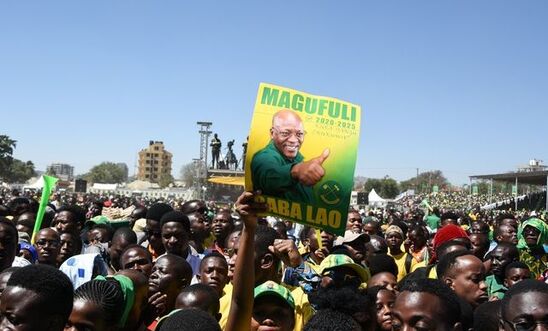 Politicians arrested and media houses suspended ahead of October election

Foreign journalists must be chaperoned by government official

Tanzanian President John Magufuli’s government has “weaponised” the law as part of a crackdown ahead of elections on 28 October, Amnesty International said, as it launched a new report Lawfare – Repression by Law Ahead of Tanzania’s General Elections today.

Amnesty’s report - based on interviews and reviews of videos, photographs, official statements, court documents and media reports - tracks the crackdown on opposition politicians, media freedom and civil society organsiations in the run-up to the election.

In recent months, opposition candidates have been arrested on spurious charges that strip them of their right to freedom of assembly, association and movement. At the same time, rules aimed at tightening the government’s control over what local and foreign media publish have come into force, violating the right to freedom of expression.

“Tanzania has weaponised the law to the point that no one really knows when they are on the right or wrong side of it.

“Politicians have been arrested for holding or attending meetings, media houses suspended and banned, online activism criminalised, and NGOs stifled with endless regulations.

“The use of the law to systemically and deliberately clamp down on people’s inalienable human rights - especially in an election season - is an extremely worrying and unhealthy sign for a country positioning itself for greater growth and development.

“The authorities must stop harassing opposition politicians over ridiculous pretexts and instead respect, uphold and facilitate the fulfilment of the rights to liberty, freedom of expression, peaceful assembly and association, to enable them to freely run their campaigns.”

Joseph Mbilinyi, a candidate with the main opposition party Chama cha Demokrasia na Maendeleo (Chadema) was arrested on 14 August, accused of organising an “unauthorised demonstration” because he was accompanied by supporters as he collected his nomination papers from the National Elections Commission offices in Mbeya. Mbilinya was later released.

The leader of the opposition Alliance for Change and Transparency, Zitto Kabwe, was arrested on 23 June with seven party officials for holding an “illegal assembly” because they had attended an internal party meeting. On 12 June, Kabwe was summoned to explain his meeting with British High Commissioner Sarah Cooke allegedly in contravention of a law which forbids a non-citizen from participating “in the decision making process of a political party with the aim of promoting the objectives of that party”.

Journalists to be chaperoned by government officials

New rules introduced in August require foreign journalists to be chaperoned on assignments by a government official. Tanzanian broadcasters must also seek permission to air content produced by foreign media following an amendment of the Radio and TV Broadcasting regulations on 11 August. The amendment was apparently triggered by the broadcast of a BBC interview with opposition politician Tundu Lissu by Radio Free Africa, a Tanzanian broadcaster.

Amnesty has also documented the banning of the Tanzania Daima newspaper associated with Chadema’s Freeman Mbowe, and the suspension of other media houses, some under the pretext of spreading false information on COVID-19. In July, Kwanza TV - associated with Maria Sarungi-Tsehai, a fierce critic of President Magufuli - was suspended on for 11 months for publishing a health alert on Tanzania from the US government.

Amnesty has documented at least four new laws passed since 2019 restricting NGOs’ operations. From June 2019, NGOs have been required to disclose the source of their funding, and from April 2020 tighter controls were introduced impeding NGOs’ freedom of association. Supervision of certain NGO functions that had previously been under the Ministry of Health, Community Development, Gender, Elderly and Children, is now overseen by the President’s Office, an indication of growing executive influence over NGO operations.

In June, human rights NGOs were also banned from undertaking election-related activities, while international observers were ordered not to speak about the elections. On 23 June, the Elections Commission also barred key civil society organisations such as the Tanzania Constitution Forum (TCF), the Tanzania Episcopal Conference (TEC), the Legal and Human Rights Centre, and the Tanzania Human Rights Defenders Coalition from conducting voter education. The latter two organisations cannot now train lawyers to handle election petitions as they had previously done.