Tanzania: crackdown on journalists reporting on COVID-19 must end 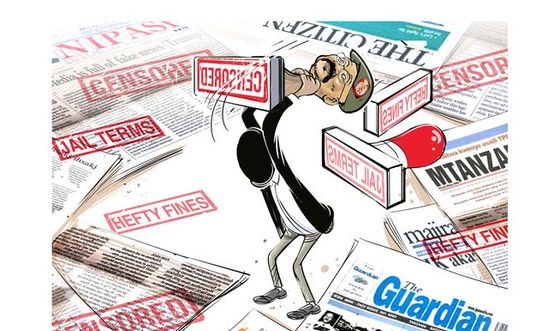 Tanzanian authorities yesterday suspended journalist Talib Ussi Hamad for six months for reporting on COVID-19, the latest in a string of attacks on media freedom during the pandemic, said Amnesty International.

The suspension of Talib Hamad – who worked for the Daima daily newspaper – comes just days after the Mwananchi daily newspaper had its license suspended after it posted a photo of President John Pombe Magufuli out shopping surrounded by a crowd of people, eliciting online discussion on the country’s approach to addressing COVID-19.

“Access to information is an essential part of the fight against COVID-19, yet the Tanzanian government is choosing to censor journalists and media outlets who report on the disease.

“These recent reprisals are clearly politically motivated - the Tanzanian government’s sensitivity to criticism is costing journalists their rights and livelihoods.

“In recent years Tanzania has increasingly used repressive laws to silence and punish journalists for doing their jobs. We are calling on the authorities to end this crackdown on media freedom and stop using the law as a tool of censorship and repression.”

The authorities cited provisions of the restrictive Media Services Act in issuing both suspensions. Talib Hamad was suspended for allegedly reporting about a COVID-19 patient without the patient’s consent.

Mwananchi newspaper was suspended and fined five million Tanzanian shillings (about £1760) for publishing a photo of the president buying fish in his home village of Chato, in northwestern Tanzania, on 13 April, apparently breaching global social distancing guidelines. Authorities said the photo was not recent.

On 2 April, three other media organisations - Star Media Tanzania Ltd, Multichoice Tanzania Ltd and Azam Digital Broadcast Ltd - were each fined the same amount and ordered to apologise for “transmission of false and misleading information” on the country’s approach to managing COVID-19.

The media plays a crucial role in informing the public about the factual situation and measures taken by governments in response to COVID-19. Its capacity to operate freely should not be unduly restricted.