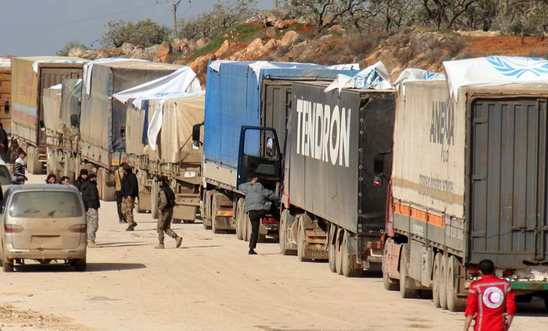 Russia and China’s use of their veto powers to stop the renewal of a UN resolution on aid deliveries into Syria will leave millions of civilians in northern Syria cut off from lifesaving aid, Amnesty International said.

Amnesty has described the move as “callous”.

UN resolution 2165, originally adopted in 2014, has enabled UN agencies and their partners to send more than 30,000 truck-loads of humanitarian assistance from Jordan, Iraq and Turkey to those in need in opposition-controlled areas in Syria.

But last month, Russia and China vetoed a UN resolution that would have renewed the mechanism established in resolution 2165 allowing cross-border deliveries. The resolution expires today, meaning these aid deliveries will cease.

There are currently an estimated 2.7 million people in need of humanitarian assistance in north-western Syria, including thousands of internally-displaced people who have fled hostilities in other parts of the country since the crisis began in 2011.

“By vetoing the renewal of the UN resolution in December - the only humanitarian action taken by the Council on Syria - Russia and China have callously chosen to deny lifesaving humanitarian assistance and essential services to millions of Syrian civilians.

“Cross-border delivery of humanitarian aid has offered a lifeline for millions of civilians in northern Syria, who for years have suffered as a result of severely-limited access to basic services such as clean water and vital health care.

“Security Council members and the UN Secretary General must take a strong stance against the use of veto when a resolution is aimed at protecting civilians. The Council must urgently establish a mechanism to ensure unfettered humanitarian aid can reach those in need in all parts of Syria.”

UN will be reliant on Syrian Government to deliver aid

The failure to renew the mechanism will make the already-dire humanitarian situation in the country much worse, especially in Idlib and surrounding areas. In recent weeks, Syrian and Russian forces have significantly escalated their attacks in the region, displacing hundreds of thousands of people and causing local and international aid agencies to reduce aid their operations.

Without the renewal of the cross-border mechanism, the UN will be forced to request approval from the Syrian Government to deliver aid to northern Syria (Idlib, northern Aleppo, and north-east), with no guarantee that these requests will be approved.