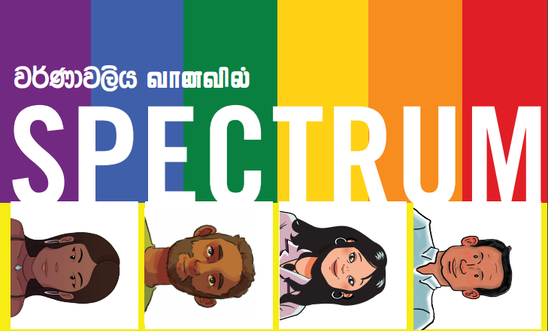 The Sri Lankan authorities must end discrimination against LGBTI people, Amnesty International said today as it published a graphic novel recounting the struggles of LGBTI people in the country.

The comic, ‘Spectrum: Four Stories of Discrimination Faced by LGBTI People’, tells four true stories of how LGBTI people in Sri Lanka have suffered discrimination and violence in their daily lives, from workplace bullying to police harassment.

Societal taboo has been punishing for LGBTI individuals when it comes to their jobs, homes and schools, frequently compromising their ability to access services that are essential to their human rights.

“Individuals must not be discriminated on the basis of their sexual orientation or gender identity, but Sri Lanka has made little to no progress towards setting aside the laws that do.

“A safer environment for LGBTI people must be created before the situation in Sri Lanka deteriorates further.

“The laws that prevent that from happening must be repealed, and protections that help uphold the rights of LGBTI people should be put in place without delay.”

In 1883, the British – who had taken control of Sri Lanka – introduced a new Penal Code, laying out the country’s main crimes. Section 365 and 365A prohibited “carnal intercourse against the order of nature” and “gross indecency”.

The Penal Code did not give a specific explanation of such offences, but these vague and overly-broad 136-year-old colonial laws are still being used to target LGBTI people in Sri Lanka today.

In addition to Sections 365 and 365A, Section 399 of the Penal Code bans “cheating by impersonation” which means pretending to be someone else or telling a person they are someone that they are not. This law has been used against transgender people, to allege that they are “pretending” to be of a different gender.

Another 178-year-old law, the Vagrants Ordinance, has been used to disproportionately target LGBTI people, allowing the police to take them into custody and even put them in prison to extort or harass them.