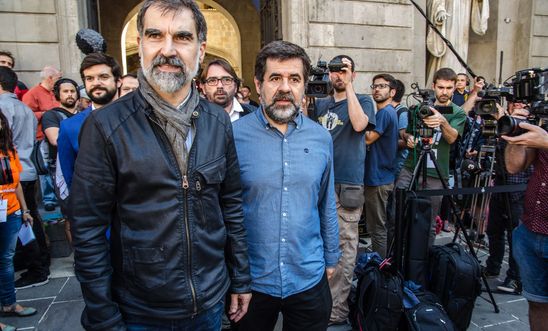 The conviction of Catalan leaders Jordi Sànchez and Jordi Cuixart found guilty of sedition are 'excessive and disproportionate', Amnesty International said today [19 November] as it released new analysis into the high-profile trial.

The sentences handed down by Spain’s Supreme Court last month, found the two civil society leaders and seven other senior Catalan officials charged with the crime of sedition under Spain’s Criminal Code and sentenced to between nine and thirteen years in prison.

“The sentences given to Jordi Sànchez and Jordi Cuixart clearly constitute an excessive and disproportionate restriction on their rights to freedom of expression and peaceful assembly.

"Parliament must urgently revise the definition of the crime of sedition to avoid criminalising peaceful acts of civil disobedience or unduly restricting freedom of peaceful assembly or expression.”

As private citizens and leaders of civil society organisations, Jordi Sànchez and Jordi Cuixart had a right to express their opinions and to organise peaceful meetings to support the referendum and the independence of Catalonia.

Having monitored the whole trial, Amnesty concludeded that the nine-year sentences imposed on Sànchez and Cuixart for sedition represents a disproportionate restriction on their rights to freedom of expression and peaceful assembly. Amnesty also found that the Supreme Court failed to demonstrate that the imposition of such severe penalties were proportionate to the peaceful acts of which they were accused.

Amnesty found the lack of clarity around the crime of sedition in Spain's Criminal Code has allowed the imposition of undue restrictions on the rights to freedom of expression and peaceful assembly. As a result, a wide range of non-violent direct actions are being wrongfully criminalised. It also brings into question the convictions for sedition imposed on the Catalan political leaders.

“Everyone has the right to know if their conduct may constitute a crime. But this ruling demonstrates that the vague nature of the definition of the crime of sedition allows it to be used excessively. The interpretation of this crime by the Supreme Court could have a detrimental chilling effect that could prevent people from participating in peaceful protests without of fear.”