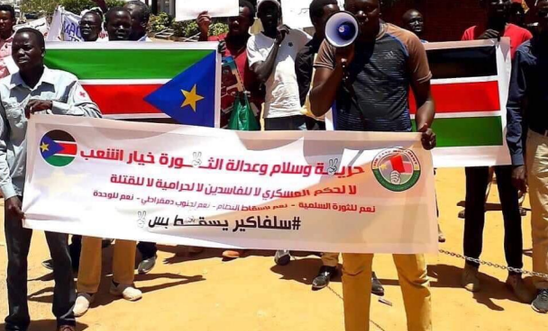 The authorities in South Sudan have conducted a cross-border campaign of harassment, intimidation and attacks to shut down a series of global protests planned against the country’s leadership, Amnesty International revealed today in a new briefing.

The planned protests were organised by the Red Card Movement, a South Sudanese youth group open to any individual who embraces non-violence. Amnesty’s  briefing - South Sudan: ‘We Are At Risk And On The Run’ - reveals how the group’s organisers have been subjected to threats by government figures and followed during a campaign of intimidation.

Protests were planned to take place on 16 May in South Sudan’s capital Juba, as well as other locations around the world. But prior to the protests, senior members of South Sudan’s government made thinly-veiled threats against organisers.

On 7 May, Information Minister Michael Makuei Lueth threatened would-be protesters with deadly consequences if they took part in the protests. He said: “Those who want to protest are welcome but let them be ready to face consequences. We know those who are spearheading the attempts. We don’t want youth to die again.”

President Salva Kiir publicly reiterated these threats on 21 May, saying: “Those who are telling you to go before the government and protest, don’t they know that anything could happen, and people may die? If the government closes its mind and decides to use automatic weapons, why do you want to die for nothing?”

Door-to-door searches of people’s homes were carried out by officers from the National Security Services (NSS) and the army. The authorities also deployed a large number of troops in Juba and closed public spaces.

Garang Aher, 30, was arrested by three security service agents at his home on 19 May for alleged links with the movement after his phone number was found in a Red Card Movement WhatsApp group conversation leaked to the security agents. He was released on 23 May.

Intimidation and harassment of Red Card Movement members also occurred in Ethiopia and Kenya. Protests organised outside South Sudan embassies in Australia, the US and Sudan took place unhindered.

Two cameramen covering a peaceful Red Card Movement demonstration outside the South Sudan embassy in the Ethiopian capital Addis Ababa were physically assaulted. One eyewitness told Amnesty: “I saw the embassy staff member slapping the video man and another man shoving violently another cameraman, who was badly beaten in his face.”

In Kenya, RCM members were threatened with arrest and deportation back to Juba, where they were told they were at risk of being forcibly disappeared. One of them told Amnesty the threats were unnervingly blatant.

They also told Amnesty they were followed by men in black suits. They said: “Anonymous people are following us. When we stop, they stop. When we show up somewhere, they also show up. We are at risk and on the run.”

This intimidation and harassment continued after the aborted 16 May protests. On 9 July, South Sudan’s Independence Day, members and supporters of the group staged a peaceful protest in front of the South Sudan embassy in Nairobi.

They were dispersed by Kenyan police despite complying with the legal requirement to notify the police about the planned protest. Three of them were arrested and charged with unlawful assembly. They were released on bail the next day, and told Amnesty they had been beaten by police officers.

“It is a shame that the authorities fail to appreciate the pivotal role that respecting, protecting and promoting human rights plays in the country’s growth and development.

“People should be free to criticise their government and its policies without fear of reprisals.

“The Government of South Sudan must publicly denounce the escalating harassment, intimidation and attacks on people simply for exercising their rights to freedom of expression, peaceful assembly and association, and stop attacks on critics both at home and abroad.”