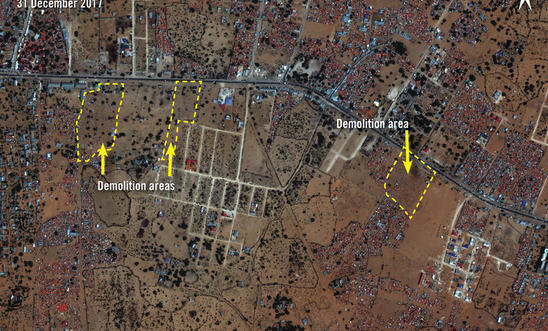 'What makes these demolitions particularly cruel is that thousands of people affected had only recently sought protection after fleeing insecurity, drought and impending famine elsewhere' - Sarah Jackson

New satellite image analysis by Amnesty International has revealed how thousands of buildings, including several schools, were demolished in sudden forced evictions that left more than 4,000 families homeless on the outskirts of Somalia’s capital Mogadishu in late December.

No warning was given before armed men accompanied bulldozers to raze the sites on 29 and 30 December 2017, according to UNICEF and Save the Children. UN agencies said the forced evictions left more than 24,000 internally-displaced persons homeless, including 3,000 children.

Amnesty’s analysis of satellite images from before, during and after the demolitions clearly shows that thousands of structures were demolished over the course of a two-day operation. A UN humanitarian official said that basic infrastructure, including toilet facilities, schools and community centres, were destroyed.

According to figures cited by the UN Refugee Agency (UNHCR), an average of 155,000 people have been evicted in the country every year since 2015. Such evictions routinely take place without prior notice or consultation and make no provision for alternative accommodation for victims. Amnesty International is calling on the Somali government to halt all evictions until necessary safeguards are in place, in line with its obligations under the Kampala Convention, as well as other international and regional human rights treaties it has ratified. Victims of previous forced evictions must receive effective redress for the human rights violations they have suffered, including adequate compensation and alternative accommodation.

Earlier this week (17 January), Gamal Hassan, Somalia’s minister for planning, investment and economic development, said there would be an investigation into the recent forced evictions.

“These satellite images give a bird’s-eye view of the shocking scale of these forced evictions that destroyed the possessions, dwellings and livelihoods of thousands of vulnerable families.

“Forced evictions are always a human rights violation and inevitably put people who are already in a very vulnerable situation at even greater risk. What makes these demolitions particularly cruel is that many of the thousands of people affected had only recently sought protection in Mogadishu after fleeing insecurity, drought and impending famine elsewhere in Somalia.

“It’s encouraging to hear the Somali authorities express concern and promise an investigation, but much more clearly needs to be done to end the recurring nightmare that forced evictions pose for internally displaced people in Somalia.

“When IDPs must be relocated, it should only be after all other options have been considered in genuine consultation with those communities and that also leads to safe and adequate alternative housing being provided.”

Blighted by conflict and drought

Somalia has been blighted by conflict for decades, and between January 2016 and October 2017 there were around 4,585 civilian casualties, according to the UN Assistance Mission in Somalia (UNSOM). The armed group Al-Shabaab maintains control over a significant portion of the country and carries out indiscriminate attacks which have killed or injured hundreds of civilians in the past year alone.

In the midst of this insecurity, the humanitarian situation in Somalia continues to deteriorate. The country is currently experiencing a devastating drought and there is a persistent threat of famine. According to the United Nations Office for the Coordination of Humanitarian Affairs, more than half the population is in need of humanitarian assistance.

This combination of factors has led to a huge internal displacement crisis. As of this month, there were 2.1 million internally-displaced people in Somalia, many of whom have crowded into urban areas, placing a huge strain on resources. The lack of clean water in Somalia has also triggered a cholera outbreak which has killed upwards of 1,500 people.

Amnesty reports have documented previous mass forced evictions of internally-displaced people in Mogadishu (September 2013) as well as the  insecurity, drought and hunger facing returnees who were pressured to leave Dadaab refugee camp in neighbouring Kenya at the end of last year.

Somalia has ratified a number of human rights treaties which should guarantee economic, social and cultural rights and prohibit forced evictions.