Singapore: 20,000 migrant workers quarantined in dormitories a 'recipe for disaster' 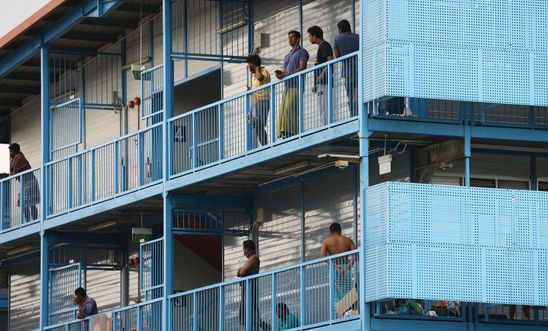 Responding to reports that more than 20,000 migrant workers in Singapore have been put under quarantine in two dormitories that have been designated “isolation areas”, Rachel Chhoa-Howard, Amnesty International’s Singapore Researcher, said:

“The rapid spread of COVID-19 among migrant workers in Singapore was already alarming. The fact that thousands are now under quarantine in extremely close proximity could be a recipe for disaster, unless their basic rights are respected.

“Migrant workers living in crowded quarters, without opportunities to self-isolate and protect themselves, are at particular risk of exposure to the virus. Amnesty International has previously expressed concerns over the lack of adequate sanitation available in housing for migrant workers, which could also put them at greater risk.

“Quarantines must always be imposed in a manner consistent with human rights.

“The Singapore government must ensure that human rights remain central to all attempts at prevention and containment of the COVID-19 virus, and that all people have access to adequate space for social distancing, adequate water and sanitation facilities, and access to proper healthcare and hygiene equipment for everyone affected, without discrimination.”

Earlier today, the Singapore government announced it was designating two foreign worker dormitories as “isolation areas” due to an upsurge in cases of COVID-19. To date, the SS11 dormitory in Punggol and the Westlite Toh Guan dormitory have accounted for a total of 90 cases of COVID-19.

More than 20,000 migrant workers will be placed under strict quarantine for the next two weeks. Workers will not be able to move between rooms, floors or blocks in the dormitories, but the authorities have said time for recreation will be provided. Workers will also undergo health screenings, and those found to be ill will be kept in isolation. Amnesty has previously expressed concerns about the housing and labour rights of foreign workers in Singapore, particularly those living in unhygienic conditions.