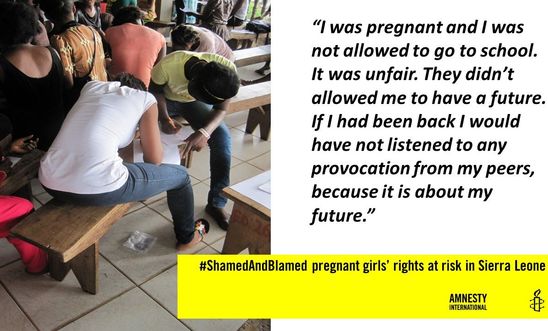 Right to education of up to 10,000 girls still under threat post Ebola crisis

Reports of humiliating physical examinations of girls on school premises

Thousands of pregnant girls, excluded from mainstream schools and barred from sitting upcoming exams, risk being left behind as Sierra Leone moves forward from the Ebola crisis, Amnesty International said in a new report published today.

The report Shamed and blamed: Pregnant girls’ rights at risk in Sierra Leone reveals how the prohibition, confirmed by the government in April this year and sometimes enforced through humiliating physical checks, not only stigmatises an estimated 10,000 girls but jeopardises their future. With exams scheduled for 23 November, Amnesty is calling on authorities to immediately lift the ban.

During the peak of the Ebola crisis, between June 2014 and April 2015 when schools were closed, the rate of adolescent pregnancy in the country rose. Many of these pregnancies resulted from rights violations including failure to protect girls from sexual violence.

“Excluding pregnant girls from mainstream schools and banning them from sitting crucial exams is discriminatory and will have devastating consequences. Education is a right and not something for governments to arbitrarily take away as a punishment.

"As Sierra Leone moves forward from the devastating Ebola crisis, it is vital that these girls, are not left behind."

On 2 April the Minister of Education, Science and Technology issued a statement banning pregnant girls from “school settings”. The justification given for this policy - namely to protect "innocent girls” from negative influences – only serves to reinforce stigma through language that blames and shames pregnant girls.

Amnesty has documented how this ban has been enforced in some schools through humiliating and degrading treatment of girls including physical searches and tests. Some have had their breasts and stomachs felt by teachers to “test” for pregnancy.  Others have been compelled by their school to take pregnancy tests.

Amnesty interviewed 52 girls, some of whom said they felt scared at the possibility of being accused of being pregnant, while others described the feeling of humiliation at being physically assessed.

One 18 year-old girl described how all girls were checked by teachers before they were allowed to sit an exam:

“They touched our breasts and stomachs to see if we were pregnant. Some girls were made to take urine tests. One of the teachers was wearing gloves when she was checking us. I felt really embarrassed when this happened to me. Many girls left as they were scared the teachers would find out they are pregnant. About 12 pregnant girls did not sit their exams.”

Whilst the way in which girls are “tested” for pregnancy is not part of government policy, the practice is widely known. Amnesty is calling on the government to issue urgent directives banning such humiliating and degrading treatment of girls.

In late October temporary alternative classes were introduced for pregnant schoolgirls funded until July 2016 by donor countries, particularly Ireland and the UK.

While the government claims that more than 3,000 pregnant schoolgirls have registered for this scheme, the classes are held in different premises or at different times to their peers and the girls are still banned from exams. It has also been criticised by local experts because of the stigmatising effect of persistent exclusion from mainstream education.

As the Ebola crisis spread last year, schools in Sierra Leone were closed between June 2014 and April 2015 as part of emergency measures to reduce infection rates. During this period, there was an increase in adolescent pregnancy. Many of these pregnancies resulted from rights violations including failure to protect girls from sexual violence. Quarantines and an already overstretched healthcare system, meant that girls were not able to access sexual and reproductive health support or advice to protect themselves from early and unwanted pregnancies. Sex education in schools is limited and was removed from the curriculum after the war over a decade ago.

“Pregnant girls are being blamed and shamed in Sierra Leone. They are being denied key chances to move forward with their lives, and to ensure early pregnancy does not become the event that determines the rest of their lives.

"As the country emerges from the Ebola crisis, pregnant girls we met expressed their desire to help build up their country. Many wanted to become much needed nurses, doctors or lawyers. Unless their exclusion from mainstream education is reversed and the ban from sitting exams is lifted these girls’ dreams will not be realised."

The exclusion of pregnant girls from mainstream education and from sitting exams pre-dates the outbreak of Ebola; however, the official declaration of the ban when schools re-opened has sparked renewed debate and concern about this issue in Sierra Leone. The Human Rights Commission of Sierra Leone described the ban as discriminatory, stigmatizing and likely to worsen the marginalization of pregnant girls and women.