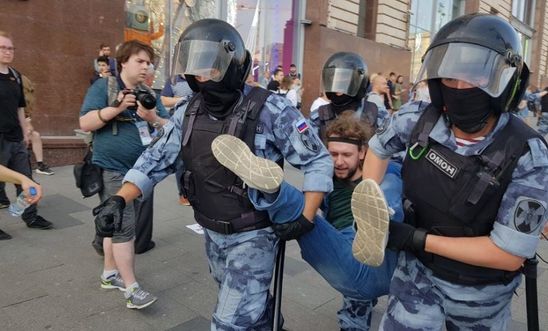 Reacting to incidents of excessive use of force by Moscow police against protesters during today’s rally in support of free elections, Natalia Zviagina, Director of Amnesty International’s Representative Office in Russia, said:

“Russian authorities today hit a new low by imposing military law-like security measures on the unsanctioned rally, blocking access to major Moscow streets and shutting down businesses in advance of the demonstration, despite the absence of credible reports of potential violence.

“Efforts to quash opposition voices reached absurd levels when protest leaders were preventively detained by police upon leaving their homes to attend the rally.

“We demand that the Russian authorities conduct an immediate, full and effective investigation into these incidents and ensure that the victims of police violence gain retribution in competent courts. All peaceful protesters must be immediately released; no one should be imprisoned for merely exercising their rights to expression and peaceful assembly.”

Protesters beaten with batons and more than 770 detained

More than 770 people have been detained during protest rallies banned by Moscow city authorities. Demonstrators had taken to the streets demanding the registration of opposition candidates barred from running for Moscow City Parliament in September.

Most of the candidates who called for the protest were detained ahead of the protest, including: Ilya Yashin, the head of Krasnoselsky municipal district of Moscow, who was detained after interrogation and searches at his home the previous night; Dmitry Gudkov, former State Duma member, who was detained while driving to Moscow from his country house; and municipal deputy Yulia Galiamina, detained when she left a friend’s house where she was in hiding.

While isolated incidents of violence from some protesters have been reported, the Moscow protest was overwhelmingly peaceful, with participants chanting “it’s a peaceful rally”. Amnesty representatives on several occasions witnessed indiscriminate use of force by police, who beat protesters with batons and knocked them to the ground. In one incident, police detained a jogger running past Moscow City Hall hours before the start of the rally. Media later reported that his leg had been broken.