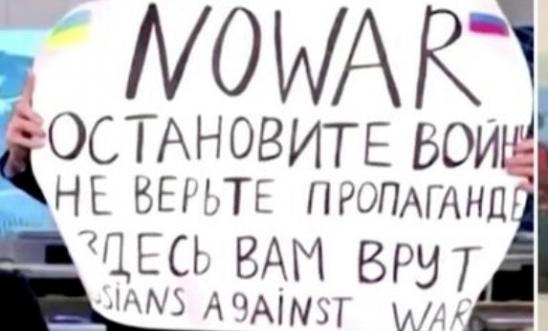 Responding to the arrest of Marina Ovsyannikova, an editor at the Russian state-controlled Channel One TV who interrupted a live news broadcast yesterday to protest against the invasion of Ukraine, Marie Struthers, Amnesty International’s Eastern Europe and Central Asia Director, said:

“Marina Ovsyannikova committed no crime. Her defiant protest shines a light where the Russian authorities have attempted to impose total darkness.

“No one should be detained solely for expressing their opinions, let alone be kept without contact with the outside world.

“Marina Ovsyannikova has shown that the courage to stand up for justice remains stronger than the state’s propaganda, even among those employed to broadcast it. She has given a striking example of how far people are willing to go to speak truth to power amid the brutal repression seen in today’s Russia.”

Yesterday, Marina Ovsyannikova burst onto camera during a live Channel One news bulletin holding a sign saying “Don’t believe the propaganda. They’re lying to you here”, shouting “Stop the war!”

According to OVD-Info, a police watchdog NGO in Russia, Ovsyannikova was quickly arrested and taken away. Overnight, the police provided no details about her fate and whereabouts, and refused to even confirm whether she was in detention. Russian media have today reported that she has been accused of the “organisation of an unauthorised public event”. Russian media have also reported that the authorities are considering opening a criminal investigation against her.