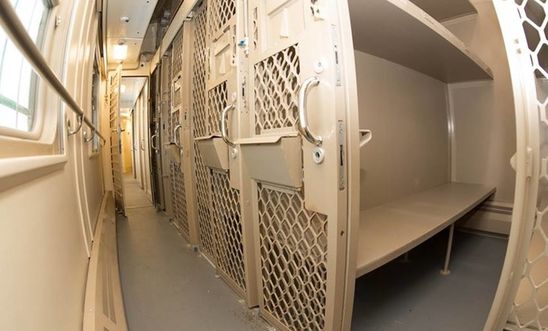 Up to 12 prisoners packed into windowless, four-person train compartments - some from Soviet period - and only allowed to use the toilet once every five or six hours

Prisoners in Russia endure inhumane conditions, often for weeks on end, as they’re transported thousands of miles in cramped, windowless trains to corrective colonies in distant parts of the country, a practice which is a clear “legacy of the GULAG”, said Amnesty International today.

The 30-page report, Prisoner transportation in Russia: Travelling into the unknown, reveals the cruel, inhuman and degrading conditions that both male and female prisoners endure in transit, under practices deriving from the Soviet past.

The Russian Federal Penitentiary Service has inherited a network of penal colonies from the GULAG system, many located in former Soviet labour camps in remote, sparsely-populated parts of the country. Prisoners are transported over vast distances to get to the colonies - sometimes in excess of 3,000 miles - making visits from family members extremely difficult. As only 46 of Russia’s 760 penal institutions accommodate women, women are more likely to be subjected to these journeys than men, with journeys sometimes lasting a month or more.

Prisoners are typically transported in special prison train carriages called “Stolypins”, many of which date from the Soviet era. Twelve or more prisoners, along with their luggage, are put in each windowless compartment - of a size which on a normal passenger train would sleep only four people.

During transportation, prisoners are only able to use the toilet once every five or six hours. They endure lengthy waits on railway sidings, with absolutely no access to toilets. Prisoners who’ve previously experienced conditions on the trains describe how they abstain from eating and drinking the night before being transported, and take as many plastic bottles as they can. One prisoner described his journey, sharing a compartment with more than a dozen other prisoners for up to four days during the five-and-a-half-week journey:

“We travelled for four days to Samara without bedding, in the clothes we came in, without anything. They didn’t even give us the chance to brush our teeth. It was 40 degrees Celsius, there was no water in the water container or in the toilet.”

“If I had known the day before I would have stopped drinking and I would have controlled my water intake. It is better to be thirsty than to suffer on the train.”

The prison authorities treat all information about transportation with the utmost secrecy. Neither the prisoners, nor their families or lawyers are told the end destination before the transfer begins. As well as being deprived of ventilation and natural light, a ban on wearing watches further increases the disorientation. In one recent case Ildar Dadin, an Amnesty prisoner of conscience jailed for taking part in peaceful anti-government protests, disappeared in December 2016 for more than a month after claiming he’d suffered torture. He turned up weeks later, on 8 January 2017, in a prison colony some 1,900 miles from the custodial facility where he was previously held. The authorities said he’d been moved “for his own safety”.

“Convicted prisoners are packed into tiny spaces on trains with no ventilation, no natural light, little water, and infrequent access to toilets. At the end of journeys that can last well over a month, they finally arrive at their destination, thousands of miles away from their families.

“During these long journeys there is no possibility for prisoners to contact the outside world and the authorities refuse to disclose their whereabouts. They effectively ‘disappear’ for weeks or even months at a time, leaving their families without news and placing them outside the protection of the law and open to further abuses.

“In legal terms it effectively amounts to enforced disappearance.

“It’s time the Russian authorities finally rid themselves of the legacy of the GULAG. They must end these practices and ensure that prisoners are transported in conditions which comply with international law and standards.”

Amnesty findings backed up by other organisations

Lyudmilla Alexeyeva, Chair of the Moscow Helsinki Group, said: “Prisoners confined to overcrowded train compartments spend days or even weeks without contact with the outside world. Once they are in transit, prisoners become invisible, their suffering unmitigated and unseen. This is cruel, inhuman or degrading treatment, pure and simple, and it’s time it stopped.”

Tanya Lokshina, Human Rights Watch, said: “Abuses against prisoners in transit are a serious problem that we have also seen in some of our own work in Russia. Just recently we have seen how the Ukrainian filmmaker Oleg Sentsov was transported from Yakutiya in the Far East to the Yamalo Nenets Republic in the Far North - a journey that took over a month.”

Aleksei Sokolov, from the Urals Human Rights Group, said: “Distance - it is one of the ways of psychologically weakening prisoners. They are very far from support, from help.”

Amnesty, Human Rights Watch and Russian human rights activists are calling on the Russian government to reform the prisoner transport system, in particular to:

*Introduce time limits on the transportation of prisoners

*Ensure that transportation facilities are subjected to public scrutiny, and that families and legal representatives are routinely kept informed about prisoners’ whereabouts

*Stop transferring prisoners from the region where they reside, in line with current legislation.

Downloads
Prisoner transportation in Russia: Travelling into the unknown