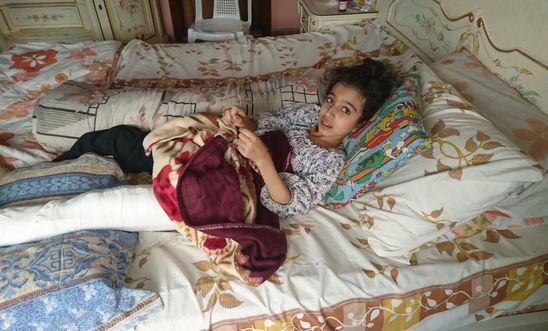 Her UK-based aunt issues appeal to UK government for help

Amnesty International is calling for Russia, the USA and the United Nations to arrange the humanitarian evacuation of a badly-injured ten-year-old girl from the Syrian town of Madaya, which is besieged by Syrian government forces.

The girl, Ghina Ahmad Wadi, was shot in the leg by a sniper on 2 August at the Abdel Majed checkpoint when she was on her way to buy medicine for her mother. She was shot in her left thigh, causing a complex bone fracture and a severing of a nerve. Her eight-year-old sister who was with her was also injured.

Madaya is controlled by Syrian government forces in alliance with Hezbollah fighters, and Ghina’s family have appealed to the Syrian authorities to allow her to be evacuated to a hospital in Damascus or in Lebanon - a request which has been denied, including in the past week.

A doctor working at a field hospital in Madaya has told Amnesty that the girl urgently needs surgery that is not available in Madaya, which has been under a tight government siege since July last year. Instead, Ghina has only been provided with sedatives - including morphine - which ease her extreme pain for only ten to 15 minutes at a time.

“It’s breaking my heart to think of little Ghina suffering like this.

“Children should have no part in this terrible war and I just want powerful countries and the UN to encourage the Syrian government to allow Ghina out of Madaya and into a properly-equipped hospital.

“If the UK government can help my niece, then I’d beg them to do so. I know Ghina’s just one among many thousands of children in Syria who’re going though things they shouldn’t have to, but she can be helped relatively easily and we need to do all we can to make that happen.”

Russia and the USA now press the Syrian authorities and Hezbollah into allowing this injured little girl out of Madaya without a minute’s further delay.

“Too many children have already been victimised by this terrible conflict and if Ghina’s heart-rending plight can be alleviated then that at least will be one small triumph for humanity in the face of all this incredible suffering.

“With Ghina’s desperately-worried aunt here in the UK, we’d like the UK Government to step in to offer its immediate assistance. We need to get Ghina out of Madaya and into a well-provided hospital - the UK can and should explore every option to see that this happens.”

Amnesty has launched an “Urgent Action” appeal for Ghina Ahmad Wadi, with thousands of its supporters expected to support the appeal.

The residents of the adjacent towns of Madaya and Buqeyn, west of Damascus, have been under siege since July 2015 by Syrian government forces and their allies. Civilian movement outside both towns has been prohibited and any access to humanitarian and medical aid has been tightly restricted. Around 40,000 people are currently trapped in the two towns with limited access to life-saving necessities and urgent medical care.

The UN Office for the Coordination of Humanitarian Affairs reported in May that some 600,000 Syrians are trapped in 18 besieged areas in the country, including 452,700 people besieged by the Syrian government in various locations such as in Damascus countryside and Homs.