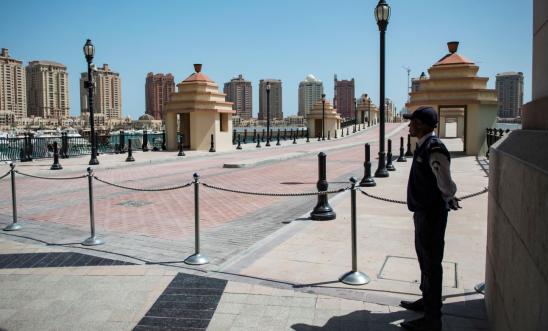 Abuses in private security sector are ‘systematic and structural’ - with overwork, no time off and punishments for not wearing uniforms correctly

Security guards in Qatar are working in conditions which amount to forced labour, including on projects linked to the 2022 FIFA World Cup, Amnesty has found.

In a new 74-page report - They Think That We’re Machines - published today, Amnesty documented the experiences of 34 current or former employees of eight private security companies in Qatar.

The security guards, all migrant workers, described routinely working 12 hours a day, seven days a week - often for months or even years on end without a day off. Most said their employers refused to respect the weekly rest day which is required by Qatari law, and workers who took their day off faced being punished with arbitrary wage deductions. One man described his first year in Qatar as “survival of the fittest”.

The 34 workers were employed by eight different private companies which provided services for sites including government ministries and football stadiums, as well as other infrastructure projects essential for the 2022 World Cup, such as hotels, transport systems and sports facilities. At least three of the companies provided security for recent FIFA tournaments, including the Club World Cup and the FIFA Arab Cup.

Qatari law and regulations restrict weekly working hours to a 60-hour maximum, including overtime, with workers entitled to one full, paid rest day each week. This reflects international law and standards - rest is a fundamental human right. Despite this, 29 of the 34 security guards who spoke to Amnesty said they regularly worked 12 hours a day, and 28 said they were routinely denied a day off, meaning many worked 84 hours per week, for weeks on end.

Milton*, from Kenya, worked for a security company at a hotel until last year. He said that on a typical day he would leave his accommodation at 6.30am and return at 8pm, and that he often went months without a single day off. Abdul, from Bangladesh, worked as a security guard from 2018 to mid-2021, and said he did not have a day off for three years.

Zeke, from Uganda, worked at the Club World Cup in February 2021. He told Amnesty how he had to complete a week-long training session in preparation for the tournament. The eight-hour training took place immediately after his regular shift each day. Zeke said:

“Imagine working a 12-hour shift then being driven to the training centre, then you do training for eight hours. All night. Then you report to work at 5am - you get four hours sleep and you train the whole week. They think that we’re machines.”

To take their rest day security guards had to seek express permission from their employers. This was often refused and taking a rest day without permission could result in wage deductions, amounting to forced labour. The International Labour Organisation defines forced labour as work that is performed involuntarily or under the threat of penalty, including financial penalty.

Edson, from Uganda, said of his employer:

“They would say ‘we don’t have enough security, so you have to work’. We didn’t have any option. If your supervisor says go to duty you have to go, or they cut your salary.”

Jacob, also from Uganda, used to work for a company guarding access roads and receiving deliveries at Khalifa International Stadium. He told Amnesty that taking the mandatory rest day without permission could result in a penalty of more than five days’ pay.

Many guards travelled to Qatar having paid hefty recruitment fees, only to find that the pay and working conditions were very different to what had been promised. Workers often felt unable to complain for fear of the consequences, as Lawrence, from Kenya, explained:

“They say at the job you have a lunch break of one hour, but we don’t have one and they don’t pay you. They say Friday is an off day, but it is an off day that you don’t have …You cannot complain - if you do you are terminated and deported.”

Some guards reported being heavily financially penalised for ‘misdemeanours’ such as not wearing their uniform properly, or for leaving their post to use the toilet without someone to cover for them. Juma described how powerless workers felt to object to such penalties:

“There is no way to challenge it. Yes, we know the rules, and what the labour law says, but how can you challenge this? You are not in a position to do so.”

Amnesty also found that four of the companies in the report are still not paying overtime at the rate required by law, meaning they are in some cases cheating guards out of eight days’ pay each month.

Amnesty’s in-depth interviews with the 34 current or former security guards, supervisors and safety officers between April 2021 and February 2022, builds on earlier 2017-18 interviews with 25 guards from a security company. The consistency of their accounts across multiple companies indicates that these abuses are systemic. In all, tens of thousands of migrant workers are employed in the private security sector in Qatar - a significant workforce often experiencing considerable work pressure, and in some cases suffering very serious abuse.

“Employers are still exploiting their workers in plain sight, and the Qatari authorities must take urgent measures to protect workers and hold abusers accountable.

“Many of the security guards we spoke to knew their employers were breaking the law but felt powerless to challenge them.

“Physically and emotionally exhausted, workers kept reporting for duty under threat of financial penalties - or worse, contract termination or deportation.

“Despite the progress Qatar has made in recent years, our research suggests that abuses in the private security sector - which will be increasingly in demand during the World Cup - remain systematic and structural.

“With the World Cup just months away, FIFA must focus on doing more to prevent abuses in the inherently perilous private security sector, or see the tournament further marred by abuse.

“More broadly, FIFA must also use its leverage to pressure Qatar to better implement its reforms and enforce its laws. Time is fast running out - if better practices are not established now, abuses will continue long after fans have gone home.”

Amnesty also documented discrimination on the basis of race, national origin and language. The security guards interviewed for the report, who are mostly from Uganda and Kenya, said that workers from sub-Saharan Africa are often deployed in the harshest conditions, for example those which require them to work in the heat for long periods. They also said they received lower wages than other guards, in particular Arabic-speaking workers, for doing the same jobs.

Asher, from Kenya, was stationed at various sites in Qatar until last year. He said:

“They pay us by nationality. You may find a Kenyan is earning 1,300, but the same security from the Philippines gets 1,500. Tunisians, 1,700. Pay is according to nationality.”

Omar said his bosses used racist stereotypes to justify harsh and discriminatory treatment of him and his colleagues: “They say ‘you are an African, you can work 12 hours because you are strong’.

Accounts of racial discrimination echo the findings of the UN Special Rapporteur on contemporary forms of racism, who visited Qatar in late 2019. While Qatar has no specific law prohibiting racial discrimination, such treatment is still in breach of Qatar’s constitution and international law.

Fifteen of the guards Amnesty interviewed were routinely deployed outside in intense heat, including during summer months when outdoor working is supposed to be restricted, and in some cases with no shelter or drinking water. This is despite the well-documented risk that heat stress poses to workers’ lives.

Since 2017, Qatar has implemented restrictions on outdoor working during the hottest months. Last year, the summer working hours ban was extended and migrant workers were given the right to stop working if they believe that heat is threatening their health. But Amnesty’s research shows that the authorities must do more to enforce protections for outdoor workers, including those in the security sector. Emmanuel, who was deployed to a luxury hotel to patrol the swimming pool, car park and beach, said:

“When it is very hot, sometimes the Qatar laws say no-one is allowed to work outside … but security [guards], where are we supposed to go?”

Similarly, although the Qatari authorities have issued clear guidelines on living conditions, Amnesty heard from eighteen of the security guards that their accommodation was overcrowded and unsanitary.

In 2017, Qatar embarked on an encouraging agenda to tackle labour issues - and has since introduced important legal reforms including a new minimum wage and improved access to justice, while repealing key aspects of the abusive “kafala” system. However, these reforms are not being effectively implemented. In addition, many of the abuses documented by Amnesty are violations of Qatari laws and regulations predating reforms. Migrant workers in Qatar are prohibited from forming or joining trade unions, exacerbating a serious power imbalance.

In 2020, FIFA and its partner in Qatar, the Supreme Committee for Delivery and Legacy, pledged to do more to improve the working and living conditions of people employed in Qatar’s service and hospitality sectors. Enhanced labour standards have been expanded to cover World Cup service workers, and the bodies have embarked on other initiatives, especially for hotel staff. But these promises have yet to fully materialise in the security sector, as Amnesty’s report starkly illustrates. Amnesty is calling on Qatar to urgently investigate abuses in the private security sector, publish its findings and offer redress for workers - including ensuring they get adequate rest and pay. Qatar should also publish a detailed action plan for effectively tackling forced labour practices in the sector.

Amnesty has not named the eight companies in its report due to the risk of high-profile clients terminating their involvement at short notice. This could lead to job losses and worsen the situation for migrant workers. Amnesty has, however, provided details to Qatar’s Ministry of Labour, as well as to FIFA and the Supreme Committee for Delivery and Legacy where relevant, and urges them to investigate further.

In response to Amnesty’s allegations, Qatar’s Ministry of Labour acknowledged that “individual cases of wrongdoing need to be dealt with immediately”. However, it disputed that these signify “underlying issues with the robust system Qatar has introduced”, saying “[T]he prevalence of rule-breaking companies has and will continue to decline as enforcement measures take hold and voluntary compliance increases among employers”.

The Supreme Committee said that irrespective of regulations or monitoring systems, some contractors will always try to “bypass the system.” It went on to confirm its commitment to address and rectify breaches. FIFA provided background information but did not respond to Amnesty’s allegations.

FIFA and the Supreme Committee did not renew the contracts of two of the three companies which were providing security to World Cup sites and reported them to the Ministry of Labour after themselves finding evidence of some of the issues Amnesty documented. However, neither body provided sufficient detail to assess whether this disengagement was carried out responsibly, transparently and as a last resort. Neither FIFA nor the Supreme Committee conducted adequate due diligence before contracting the companies, and they compounded this failing by not identifying and addressing abuses in a timely manner. As a result, both bodies benefitted from these companies’ services while abuses were taking place, and have a responsibility to provide, or cooperate in providing, remedy for workers who experienced labour abuses while deployed at World Cup-related sites and events.