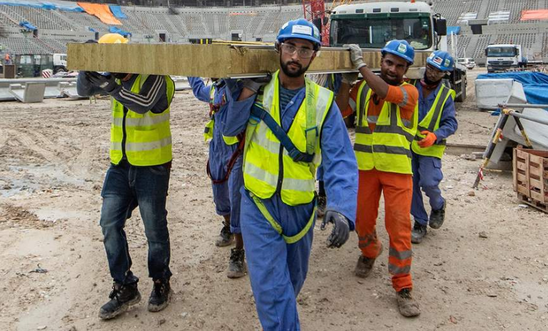 The build-up to the 2022 World Cup has seen numerous reports of workers being exploited, forced to live in squalid conditions and being denied their rights © FIFA via Getty Images

Qatar still needs to significantly strengthen enforcement of its labour reforms if it is to deliver on promises to protect workers’ rights ahead of the 2022 World Cup, Amnesty International said today.

With almost exactly two years to go until world football’s premier competition - the first match of the FIFA World Cup in Qatar will kick off on 21 November 2022 - Amnesty has released a new 35-page report - Reality Check 2020: Countdown to the 2022 World Cup.

Amnesty’s report warns that despite welcome labour reforms in Qatar (see below), the reality for many migrant workers will continue to be harsh unless further action is taken to guarantee wages, ensure access to justice, end impunity for abusive employers, and protect domestic workers from exploitation.

Amnesty is urging the Qatari authorities to better implement current reforms and introduce further ones, to strengthen inspection mechanisms to quickly detect and stop abuses, to improve workers’ ability to access justice, end the culture of impunity for abusive employers, and respect the right of migrant workers to form trade unions. It should particularly focus on strengthening protections for domestic workers, who have been left behind by many reforms.

Thousands of workers continue to be subjected to labour abuses in Qatar. A recent Amnesty report showed that many domestic workers were working more than 18 hours a day, with some never having a single day off despite the introduction of a law stipulating a ten-hour limit and a weekly rest day. Women interviewed for the report described horrendous physical and verbal abuse, and none had seen abusive employers held to account.

In June, Amnesty documented how approximately 100 migrant workers employed on a construction project for the Al Bayt World Cup stadium worked for up to seven months without pay, despite the authorities being aware of the issues for nearly a year. Most workers were finally paid the majority of what they were owed following the report’s publication, though the case highlighted continuing failures by both the Qatar authorities and FIFA to provide timely remedy to workers.

“It’s time for Qatar to send a clear signal that labour abuses will not be tolerated.

“Qatar needs to do much more to ensure legislation has a tangible impact on people’s lives.

“Positive reforms have too often been undermined by weak implementation and an unwillingness to hold abusive employers to account.

“Inspection systems are inadequate to detect abuse, and it remains challenging for workers to lodge complaints without risking their income and legal status.

“Until these reforms are fully enforced, many will remain trapped in a cycle of exploitation.”

Since 2017, Qatar has introduced several reforms aimed at benefiting migrant workers - including a law regulating working hours for live-in domestic workers, labour tribunals to facilitate access to justice, a fund to support payment of unpaid wages, and a minimum wage. Laws requiring migrant workers to seek their employers’ permission to change jobs or leave the country have been abolished, and Qatar has ratified two key international human rights treaties - albeit without recognising the right to join a trade union. Amnesty has welcomed these moves, and believes if properly and fully implemented they could help end the most problematic aspects of the “kafala” sponsorship system and enable migrant workers to flee abusive working conditions and seek redress.

As the World Cup organiser, FIFA has a responsibility to ensure human rights are respected in the context of preparing for and staging the tournament. This includes an obligation to hold its Qatar 2022 partners to account and use its clout to push Qatar to fully reform its labour system. Amnesty UK is among more than 25 Amnesty offices around the world to have written to their national football associations urging them to play an active role in pushing FIFA to help ensure the rights of migrant workers are respected. FIFA should use its voice - privately and publicly - to urge the Qatari government to fulfil its programme of labour reforms before the World Cup kicks off.