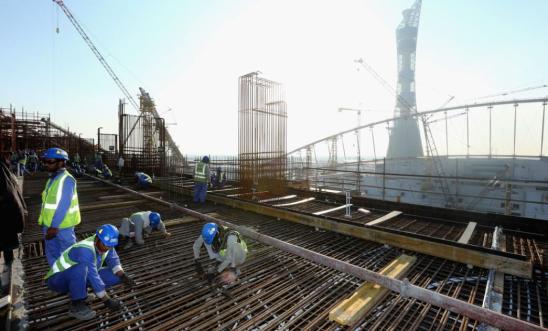 World Cup set to generate $6bn in revenue for FIFA

FIFA should set aside at least $440 million for the hundreds of thousands of migrant workers who have suffered human rights abuses in Qatar during preparations for this year’s World Cup, Amnesty International said in a new report today, six months ahead of the tournament's opening game.

The sum - the same as the prize money due to be handed out at the competition - represents only a small fraction of the $6bn total revenue FIFA is expected to make at Qatar2022.

Amnesty has estimated that the sum of $440m is likely to be the minimum necessary to cover an array of compensation costs and to support initiatives to protect workers’ rights in the future.

However, the total sum for reimbursing unpaid wages, the extortionate recruitment fees paid by hundreds of thousands of workers, and compensation for injuries and deaths could end up being higher and should be evaluated as part of a participatory process with unions, civil society organisations, the International Labour Organisation and others.

In an open letter accompanying its report, Amnesty and a coalition of human rights organisations, unions and fan groups urged FIFA president Gianni Infantino to work with Qatar to establish a comprehensive remediation programme. As well as providing compensation for all labour abuses related to hosting the tournament in Qatar, FIFA should ensure that abuses are not repeated, both in Qatar and in future tournaments.

Under the UN Guiding Principles on Business and Human Rights and its own policies, FIFA has a responsibility to remedy human rights abuses it has contributed to. This responsibility should cover not only workers building football-specific facilities such as stadiums and training sites, FIFA-accredited hotels and the broadcast centre, but also the services required to operate these facilities. This means - workers involved in building and servicing the transport, accommodation and other infrastructure required to host more than a million visitors expected to travel to Qatar to watch the tournament.

Equally, Qatar is obliged to ensure remedy for all abuses on its territory, whether linked to the World Cup or not. While there has been some progress through both the Supreme Committee for Delivery and Legacy’s initiatives and Qatar’s programme of labour reforms (see below), limited scope and weak enforcement have meant that serious human rights abuses persist. Ultimately, abuses suffered by workers over the past decade on all projects needed for this World Cup have largely remained unaddressed.

In its 62-page report - Preventable and Predictable: Why FIFA and Qatar should remedy abuses behind the 2022 World Cup - Amnesty is calling on FIFA and Qatar to set up a programme with the full participation of workers, trade unions, the International Labour Organisation and civil society. They must also learn from the experiences of other remediation programmes, such as the scheme that followed the 2013 Rana Plaza disaster in Bangladesh, in which more than 1,300 workers lost their lives.

Beyond this tournament, Amnesty is also calling on FIFA to guarantee that human rights abuses of migrant workers are not repeated, ensuring that the awarding of all future tournaments and events follow a rigorous assessment of human rights risks along with clear action plans to prevent and mitigate potential abuses. New human rights criteria were used in the bidding process for the 2026 FIFA World Cup, but do not appear to have been applied in the decisions to award the 2021 FIFA Club World Cup first to China, then to the UAE.

In response to Amnesty’s report, FIFA said its remediation efforts were focused on supporting existing Supreme Committee’s initiatives - which Amnesty criticised as overly narrow. However, FIFA also said it is “looking at ways to ensure closure of all grievances associated with FIFA World Cup projects, including pre-event cases”.

“Given the history of human rights abuses in the country, FIFA knew⁠ - or should have known⁠ - the obvious risks to workers when it awarded the tournament to Qatar. Despite this, there was not a single mention of workers or human rights in its evaluation of the Qatari bid and no conditions were put in place on labour protections.

“By turning a blind eye to foreseeable human rights abuses and failing to stop them, FIFA indisputably contributed to the widespread abuse of migrant workers involved in World Cup-related projects in Qatar, far beyond the stadiums and official hotels.

“For years, the suffering of those who made this World Cup possible has been brushed under the carpet. It is about time FIFA and Qatar came together to work on a comprehensive remediation programme that puts workers at its centre and ensures that no harm remains unaddressed.

“Under international law and by FIFA’s own rulebook, both Qatar and FIFA have obligations and responsibilities respectively to prevent human rights abuses and provide remedy to victims.

“The remediation fund Amnesty and others are calling for is entirely justifiable given the scale of abuses that have been suffered, and represents a small fraction of the $6 billion revenue FIFA will make from the tournament.”

“Thousands of migrant workers have been exploited and many have tragically died to make this World Cup possible, so we hope the FA and Gareth Southgate and the players will back this innovative scheme to secure much-needed compensation for long-suffering workers’ families.

“Nothing can bring dead workers back to life or restore the dignity of those who were trapped in conditions amounting to modern-day slavery during Qatar’s World Cup building boom, but a FIFA workers’ fund would still be an important move.

“International football can easily afford to do the right thing here. This is a comparatively small share of FIFA’s enormous prize money pot - and it would provide some real redress for the serious human rights violations that underpin this tournament.”

In 2010, FIFA awarded World Cup hosting rights to Qatar without requiring any improvement in labour protections.

Since 2018, Qatar has introduced a series of important labour reforms that aim to improve workers’ rights, but a lack of enforcement means that abuses persist. Improvements for workers on official FIFA sites, such as stadiums, were also introduced in 2014 via the Supreme Committee’s Worker Welfare Standards, but these standards are not universally respected and only cover a minority of the hundreds of thousands of workers on World Cup-related projects. One positive initiative launched by the Supreme Committee in 2018 includes an agreement with contractors on official World Cup sites to reimburse the recruitment fees of 48,000 workers, though this again remains a minority of all workers who have worked on projects essential to the World Cup.

Downloads
Preventable and Predictable: Why FIFA and Qatar should remedy abuses behind the 2022 World Cup