Paris attacks: Failure to extend solidarity to refugees would be 'tragic victory for terror over humanity' 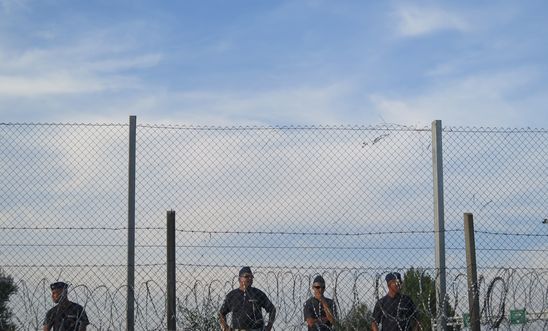 In the wake of last Friday’s atrocious attacks on Paris the EU must resist the urge to further seal off its external borders, which would continue to fuel a range of human rights abuses while doing nothing to enhance security or halt the influx of desperate refugees, said Amnesty International as it published a new report today.

Amnesty is calling for managed, safe, legal routes into Europe and fair, efficient, rigorous screening processes that would meet the needs of refugees seeking protection in Europe and address the need for identifying possible security threats.

The report, Fear and Fences: Europe’s approach to keeping refugees at bay, reveals how moves to fence off land borders and enlist neighbouring countries, such as Turkey and Morocco, as gatekeepers, have denied refugees access to asylum, exposed refugees and migrants to ill-treatment and pushed people towards life-threatening  sea journeys.

“The expanding fences along Europe’s borders have only entrenched rights violations and exacerbated the challenges of managing refugee flows in a humane and orderly manner.

“Giving in to fear in the wake of the atrocious attacks on Paris will not protect anyone. The numbers fleeing persecution and conflict have not gone away, nor has their entitlement to protection. In the wake of this tragedy, the failure to extend solidarity to people seeking shelter in Europe, often after fleeing the very same kind of violence, would be a cowardly abdication of responsibility and a tragic victory for terror over humanity.

“As long as there is violence and war, people will continue to come, and Europe must find better ways to offer protection. The EU and its front-line member states urgently need to rethink how they ensure safe and legal access to the EU both at its external land borders and in countries of origin and transit. This can be accomplished through the increased use of resettlement, family reunification and humanitarian visas.”

In total, EU member states have built more than 235 km of fences at the EU’s external borders costing in excess of 175 million Euros, including:

Instead of stopping people from coming, these fences have only redirected refugee flows to other land routes or more dangerous sea crossings. According to the UN Refugee Agency (UNHCR), the number of  people arriving in the EU by sea in 2015 reached 792,883 in November, compared 280,000 who arrived by both land and sea recorded by the EU border management agency Frontex for the entire year in 2014. So far this year, 647,581 people have arrived in Greece by sea, with 93% of arrivals coming from the world’s top 10 refugee producing countries, according to the UNHCR.

As of 10 November, 512 people have lost their lives in the Aegean this year and nearly 3,500 have died in the Mediterranean as a whole.

Push-backs and other violations at borders

People who attempted to cross the Greek, Bulgarian and Spanish land borders have told Amnesty how they were pushed back by border authorities without access to asylum procedures or a chance to appeal their return, in direct breach of international law. Push-backs are often accompanied by violence and put people’s lives in danger.

A 31-year-old Syrian refugee gave a description of a typical push-back from Greece’s land border with Turkey in April this year:

“They took us to the river bank and told us to get on our knees. It was dark by this time – about 8.30pm. There were other people there who were being sent back to Turkey. One of the police hit me on my back … he hit me on my legs and on my head with a wooden stick. They took us closer to the river and told us to be quiet and not to move. They took me away from the group and started beating us with their fists and kicking us on the floor. They held me by my hair and pushed me towards the river.”

In March 2015, Spain moved to legalise the push-backs of migrants and refugees that Spanish civil guards have been carrying out from Ceuta and Melilla, the two Spanish enclaves in North Africa bordering Morocco. In September, Hungary established transit zones at its border with Serbia to return asylum seekers to Serbia after expedited procedures with dubious safeguards.

“Where there are fences, there are human rights abuses. Illegal push-backs of asylum-seekers have become an intrinsic feature of any EU external border located on major migration routes and no one is doing much to stop them.

“Regulating entry to the EU is one thing. Denying it to refugees altogether quite another. The first is sensible and legitimate, the second is inhuman and illegal, and has to stop.”

In a further bid to keep refugees and migrants out of Europe, the EU and its member states are increasingly turning to third countries to act as Europe’s gatekeepers.

The latest proposal on the table is for an EU-Turkey Joint Action Plan which commits Turkey to “preventing irregular migration”. The deal turns a blind eye to rights violations refugees and migrants face there. In recent months, Turkey has been detaining intercepted migrants and asylum-seekers without access to lawyers and forcibly returning refugees to Syria and Iraq, in clear violation of international law. Many non-Syrian refugees wait for more than five years to have their asylum claims processed.

Moroccan border guards have also been complicit in the ill-treatment of people attempting to scale the fences surrounding the Spanish enclaves, while asylum system reforms in the country have yet to become effective.

Recommendations to the EU

The EU can and should implement a series of achievable, realistic measures to respond to the global refugee crisis and to ensure protection for the hundreds of thousands who have already arrived in mainland Europe.

Amnesty International is calling on the EU and its member states to:

·        open up safe and legal routes, including through increasing resettlement, family reunification, and humanitarian admissions and visas;

·        ensure that refugees have access to territory and asylum at the EU’s external land borders;

·        end push-backs and other human rights violations at the borders, particularly through effective investigations into allegations of abuse at the national level, and the initiation of infringement proceedings by the EU Commission, where EU law is breached;

·        accelerate and extend the implementation of its relocation scheme for asylum seekers.