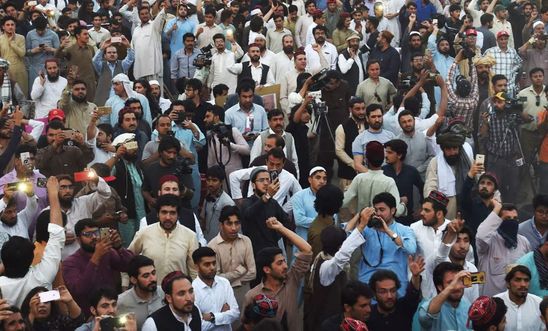 The Pakistani government should immediately order an independent and effective investigation into the reported killing of at least three activists on Sunday (26 May), Amnesty International said today.

Two parliamentarians affiliated to the Pashtun Tahaffuz Movement (PTM) were leading a procession of activists to the Khar Kamar area of North Waziristan, along the Afghan border, when firing broke out, leading to the deaths.

One of the parliamentarians, Ali Wazir, is currently in custody of the Pakistani military. There are conflicting accounts of the incident, with the military claiming that PTM activists assaulted a checkpoint and PTM activists insisting that no shots were fired from their side. Phone and internet services were shut down after this incident, adding to the confusion.

“The Pakistan government must immediately order an independent and effective investigation into the killing of activists on Sunday in North Waziristan. If the reports are correct that the army killed protesters by unlawfully using live ammunition, this would be a very serious violation of international law.

“Under international law, lethal force can only ever be used by law enforcement authorities when strictly necessary to protect life. When lethal force has been used, every incident should be fully investigated to determine if there was any use of excessive force and if any resulting killing was unlawful. Those found responsible for the use of excessive force or for unlawful killings should be brought to justice through fair trials without resort to the death penalty.”

The PTM is a movement that says it uses non-violent means to campaign against extrajudicial executions, enforced disappearances and other human rights violations suffered by Pakistan’s Pashtun ethnic minority. In the past, senior government officials – including Prime Minister Imran Khan and army chief, General Qamar Javed Bajwa – have said they recognize and sympathise with the PTM’s grievances.

Despite these statements, however, the Pakistani authorities have intensified a crackdown against the group. Dozens of its supporters have been arrested, arbitrarily detained, subject to surveillance and intimidation, and even threatened with violence. Across the country, their rallies have been banned or disrupted, denying them the rights to freedom of expression, association and peaceful assembly.

On 2 February 2019, Arman Luni, a PTM activist from Baluchistan, was killed at a protest in Lorelai. Eyewitnesses say that he was in police custody at the time. Luni’s family struggled to have a police complaint filed about his murder.