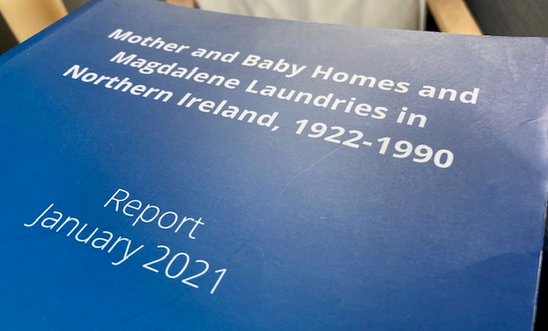 Follow-up meeting of survivors to be held next Thursday

‘Not only is a public inquiry firmly on the table, survivors want to get around that table to ensure the inquiry has the powers to deliver truth and justice.’ – Patrick Corrigan

Amnesty International and campaign group, Birth Mothers for Justice, are to hold a further online public meeting for survivors of Mother and Baby Homes and Magdalene Laundries in Northern Ireland following a well-attended gathering on Thursday evening (28 January).

Last night’s meeting was attended by thirty survivors of the institutions, who expressed strong support for a public inquiry and demanded a full say in determining its powers and terms of reference.

Survivors agreed to hold a follow-up meeting on Thursday 4 February at 7pm.

Eunan Duffy, was born while his mother was in Marian Vale home in Newry, one of the organisers of the meeting said:

“There is a huge appetite among victims and survivors to get under way with the design of this inquiry.

“We heard at the meeting that survivors do not just want to be consulted, they want full participation in decision-making on the inquiry and other matters which affect their lives.”

“We had a very positive and well-attended meeting, with survivors drawn from Mother and Baby Homes across Northern Ireland, discussing what they want from the Executive and how they want to be central to decision-making.

“Judith Gillespie, who chairs the Executive’s working group has said that a public inquiry is ‘not off the table’.

“Based on what was said at the meeting, not only is a public inquiry firmly on the table, survivors want to get around that table to ensure the inquiry has the powers to deliver truth and justice.

“Archbishop Eamon Martin’s statement of support for a public inquiry is very welcome. His words will be tested by the degree to which they are followed by action on disclosure of records and redress by the Church and Catholic religious orders.

“Leaders of Protestant churches, which were also involved in running these institutions, should follow suit. Survivors from these ‘homes’ also want to hear from the leaders of the churches which were responsible for their suffering in the name of a repressive moral code.”

Survivors can register for the meeting, which will be held online at 7pm on Thursday 4 February.