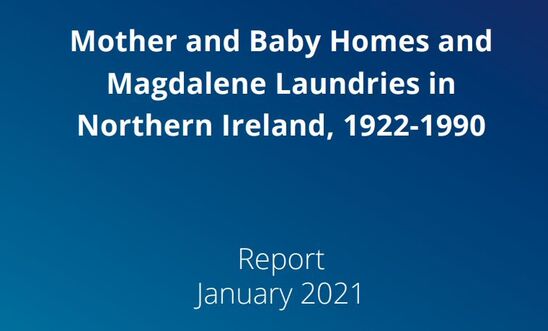 The promise made today by the Northern Ireland Executive that an inquiry process co-designed with survivors will be undertaken, following the publication of a shocking report into Mother and Baby Homes in Northern Ireland, was welcomed by Amnesty International.

In a meeting with survivors this morning, which Amnesty attended, ahead of the report’s publication, the First and deputy First Minister committed the Executive to establishing a further inquiry process which would be jointly designed by survivors of Mother and Baby Homes and Magdalene Laundries in the region. The commitment was followed up with an announcement this afternoon in the Assembly.

The Ministers said the Executive would support a process, lasting up to six months, which would agree the design and terms of reference of the investigation process with survivors. They committed to implementing the agreed proposals of this process, including a potential statutory or non-statutory public inquiry, along with other support mechanisms such as counselling.

The commitments made today, accompany the publication of the 534-page research report commissioned by the Northern Ireland Executive into Mother and Baby Homes and Magdalene Laundries in the region. It provides the fullest picture yet of the experiences of more than 14,000 women and girls sent to the institutions, most commonly as a result of pregnancy outside of marriage, almost double the 7,500 estimated number of women who were thought to have been forced into the institutions.

The institutions were operated by both Catholic and Protestant churches and religious organisations, but were largely funded from the public purse. Many of the women and girls were referred to the institutions by State welfare authorities and even the Courts. The report documents the reported “cruel” and “unsympathetic” attitudes of staff in the Homes.

5% of women and girls in Magdalene Laundries attempted escape, but were routinely returned by the police. The report documents one case from the early 1970s, of a 14-year-old who repeatedly ran away from St Mary’s Magdalene Laundry in Derry, even being returned on one occasion by the British Army and police.

The researchers document the movement of women, girls and babies across the Irish border in both directions. 551 babies born in Homes in Northern Ireland were moved to the Republic of Ireland, with some being adopted there or onwards in Great Britain and the United States.

The researchers did not have access to adoption records and were unable to establish the legality of these cross-border adoptions.

The report gives disturbing accounts of girls sent to the Homes following pregnancy as a result of incest and rape. The researchers were unable to establish if the men and boys allegedly responsible for the sexual offences were reported to the police.

Many of the babies and women who died in the Homes and Laundries are buried in mass, often unmarked, graves in various cemeteries across Northern Ireland.

Former residents of the homes, alongside Amnesty, are now calling for a public inquiry to be established by the Northern Ireland Executive. Amnesty International first submitted a paper to the Executive in 2013 making the case for such an inquiry.

“This ground-breaking research sheds new light on the industrial scale suffering experienced by generations of women and girls.

“The researchers have done a remarkable job of starting to document the many ways in which thousands of young lives were scarred by these cruel institutions, scars which remain to this day.

“However, many questions remain unanswered. When addressing allegations of serious and systemic human rights violations, academic research, no matter how good, can be no substitute for a properly-empowered, independent investigation and so we welcome the commitment today by the Executive to an inquiry to be designed in partnership with survivors.

“It’s time for the women and girls forced into the homes, and the children born there, to have their voices properly heard. They have been failed in countless ways for so many years and so it’s vital the inquiry gets to the truth and delivers the justice they deserve.”