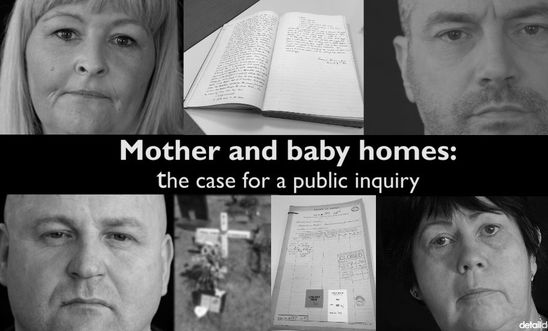 Women who were forced to give birth in Mother and Baby Homes in Northern Ireland, and children who were born in the homes, are calling today for a public inquiry into abuses they say they suffered there.

The call comes as new findings are released today following an investigation by Detail Data. The investigation reveals the harsh treatment suffered by women and girls in the homes and allegations of removal and forced adoption of new-born babies against the wishes of their mothers.

Women and children born in the homes are making their call today at a protest outside the former Laundry and Mother and Baby Home run by the Good Shepherd Sisters, on Belfast’s Ormeau Road. The group are to gather outside the high walls of the former home, holding signs calling for truth and justice.

Oonagh McAleer, Chairperson of the Birth Mothers and their Children for Justice NI campaign group, was forced into Marianvale mother and baby home in Newry when she became pregnant as a 17 year-old. She gave birth to a son in 1980 but was prevented from ever seeing or holding her baby before he was taken away for adoption against her will. She said:

“My baby was taken from me as soon as he was born. I never even got to hold him, or even to look at his face. He was adopted against my knowledge or agreement. The nuns and the government did that to me. And they did it to my child and to so many other women and girls and their babies across Northern Ireland for decade after decade.

“We demand the truth be told now, at long last. We demand a public inquiry.

“There is an inquiry happening right now in the Republic of Ireland. Are we worth less to our government? Does our suffering not count?

“We have been asking the Executive to set up an inquiry for years. And, for years, Ministers have brushed us aside. No more. We want truth and justice and we want it now.”

“Women in Northern Ireland have told Amnesty that they suffered arbitrary detention, forced labour, ill-treatment, and the removal and forced adoption of their babies - criminal acts in both domestic and international law.

“In 2013 Amnesty submitted a briefing paper to the Northern Ireland Executive supporting the case for a public inquiry into abuses in these Homes.

“Sadly, Stormont has ignored victims’ calls for an inquiry for years. That cannot continue. After the June 29th Talks deadline, either the government in Stormont or at Westminster must deliver a human rights compliant investigation into the allegations of systemic human rights abuses at these institutions.”

Commenting on the finding by The Detail website that at least 43 babies died in a single year from severe malnutrition at two Sisters of Nazareth children’s homes in Belfast, Patrick Corrigan said:

“The death from severe malnutrition of so many babies, supposedly being cared for on behalf of the State, is heart-breaking.

“So many of these babies were branded as ‘illegitimate’ on birth, some wrenched from their mothers as new-borns, put into loveless institutions, starved to death, and finally disposed of in mass graves in bog land. To think of the brief lives of those babies would bring tears from a stone.

“These distressing revelations underline the serious concerns we have long held about how children and women were reportedly treated in these linked institutions, including apparently high child mortality rates, forced adoption practices, and the ill-treatment of women.”

The Good Shepherd Sisters ran a laundry and home at the Ormeau Road site in Belfast from the late 19th century until 1977 and 1990 respectively. Thousands of girls and women passed through its doors and the doors of other such Homes across Northern Ireland. The same order of nuns ran two other laundries, one in Newry, Marianvale, which operated into the 1980s, and another in Derry / Londonderry.

A Magdalene Asylum and laundry was operated by the Church of Ireland on Belfast’s Donegall Pass, with the home continuing into the 1960s, while the Presbyterian Church was associated with the Ulster Female Penitentiary in central Belfast. In total, Amnesty International has previously identified twelve Mother and Baby Homes or Magdalene Laundry-type institutions which operated in Northern Ireland in the last century.

The Irish Government has established a commission of inquiry into alleged abuses at Mother and Baby Homes in the Republic of Ireland. To date, the Northern Ireland government has refused to set up a similar inquiry.

The UN Committee Against Torture and the UN Committee for the Elimination of Discrimination Against Women have both recommended that the Northern Ireland Executive should establish an inquiry into abuses in such institutions. Despite various internal reviews commissioned by the Northern Ireland Executive, it has refused to commit to setting up an inquiry.