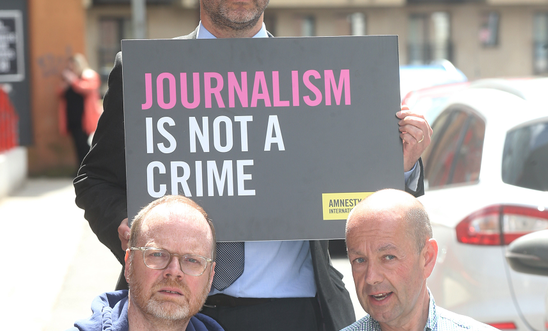 Amnesty International today handed over more than 20,000 messages of support to No Stone Unturned journalists Trevor Birney and Barry McCaffrey.

Collected during Amnesty’s 10-month campaign to support the award-winning investigative journalists, the messages of solidarity were delivered to the pair in mailbags outside the Royal Mail depot in Belfast.

The thousands of messages from around the world were handed over by Patrick Corrigan, Amnesty International’s Northern Ireland Programme Director, on the 25th anniversary of the Loughinisland massacre.

“Amnesty supporters were rightly outraged when Trevor and Barry were arrested for their important work uncovering collusion in the Loughinisland massacre.

“The threat to a free press was one that made international headlines, and it was deeply troubling to see police trying to jail journalists who helped expose human rights abuses - rather than those who actually murdered six innocent people.

“Today marks 25 years to the day since the Loughinisland murders. The most effective way for the PSNI to demonstrate that they have learnt the lessons of this case would be to prioritise putting the killers behind bars.”

“It’s only in times of crisis that you learn who are the people who are really prepared to stand up for what is right. Amnesty stood shoulder-to-shoulder with us throughout the harrowing 10-month ordeal of police bail and having to fight through the courts to clear our names.

“Thankfully, through our victory in this case, the courts in Northern Ireland have safeguarded journalists’ legal right throughout the UK to protect sources, and for whistleblowers to expose evidence of wrongdoing wherever and whenever it is found.

“None of this would have been possible without Amnesty’s support, for which we will be eternally grateful.”

Birney and McCaffrey were arrested and questioned by police last August in connection with the 2017 documentary film No Stone Unturned. The film, directed by Oscar-winning film-maker Alex Gibney, explored the unsolved murder of six men watching a World Cup football match in a bar in the village of Loughinisland, County Down in 1994, examining the police investigation in detail and naming one of the alleged killers.

Earlier this month, Durham Police announced they were dropping the criminal investigation of Birney and McCaffrey, a move which followed the journalists’ successful request to Belfast High Court that the search warrants used in the raid on their homes and office be quashed.

A 2016 report from the Police Ombudsman for Northern Ireland found there had been collusion between the Royal Ulster Constabulary and the Ulster Volunteer Force killers in Loughinisland, and that the subsequent police investigation had been undermined by a desire to protect those responsible for the murders.

Last August, Birney and McCaffrey were arrested in connection with an alleged breach of the Official Secrets Act, relating to confidential documents about the Loughinisland police investigation. An estimated 100 police officers from the PSNI and Durham Constabulary raided the journalists’ homes and offices, seizing documents and computers, which the men have since had returned. The pair have not been charged and remain on bail since their arrests.