Northern Ireland: levels of racism ‘should shock us to our core’, says Amnesty 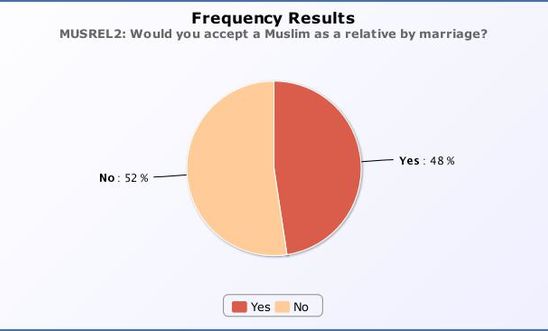 Would you accept a Muslim as a relative by marriage? © Northern Ireland Life and Times Survey 2017

Amnesty is calling for a more robust government response to tackling racial prejudice in Northern Ireland, including an independent review of the region’s equality and hate crime laws.

Figures from the Northern Ireland Life and Times Survey, published today, show that more than half of people surveyed would not willingly accept a Muslim (52%) or an Irish Traveller (56%) as a relative by way of marrying a close member of their family. Other statistics reveal that:

“These shocking figures show that Northern Ireland has a huge problem with racism. The levels of racial prejudice in our midst should serve as a wake-up call to politicians and officials charged with making Northern Ireland a better place to live for everyone.

“These figures demonstrate that government in Northern Ireland is utterly failing to tackle the deep-rooted racial prejudice which affects too many people here.

“Politicians and officials need to wake up to this prejudice, which makes Northern Ireland a toxic place to live for too many people from minority ethnic and religious communities. We need a much more ambitious and joined-up strategy to tackle racial prejudice. That must include bringing our race equality laws into line with the rest of the UK, where Northern Ireland has fallen behind, and an improvement on prosecution and conviction rates for those responsible for race hate crimes.”

Despite these worrying findings, the survey did show strong levels of support amongst the Northern Ireland public for providing protection to refugees: 64% of people think it is our duty to provide protection to refugees who are escaping persecution in their home country, while 57% agree and only 17% disagreed that people from Syria should be allowed to come to Northern Ireland.

“It is clear that there is strong support among the Northern Ireland public for providing asylum to those feeling war and persecution, whether in Syria or elsewhere. That is a very welcome recognition of our international human rights responsibilities and an indication that most people here have empathy and compassion for refugees. The government must build on this sentiment to create a truly welcoming Northern Ireland for all.”

Amnesty is calling for the following steps in Northern Ireland:

*Race equality legislation should be strengthened to bring it into line with the UK Government’s international obligations relating to the promotion of human rights for racial minorities and other groups, and with the recommendations of international human rights monitoring bodies.

*The Department of Justice should initiate an independent review of hate crime legislation to consider the scope for improvement of current laws.

*Detailed data on hate crime and public perceptions regarding hate crime, comparable with other parts of the UK, should be collected and published.