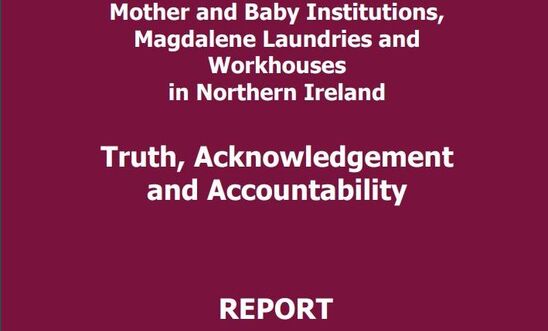 Amnesty International has welcomed recommendations to the Northern Ireland Executive urging the establishment of an independent public inquiry into Mother and Baby, Magdalene Laundry and workhouse institutions in the region.

The recommendations come in a report published by the independent Truth Recovery Panel, following a six-month co-design process by its members, senior social worker Deirdre Mahon, legal academic and campaigner Dr Maeve O’Rourke, and Emeritus Professor Phil Scraton. Survivors of the institutions and Amnesty International contributed to the panel’s work.

Last week Amnesty wrote to ministers recommending a public inquiry into alleged human rights abuses in the institutions. Amnesty has been campaigning with survivors for an inquiry for ten years.

“This is a landmark day for victims of serious and widespread human rights violations, who have waited a long time for justice.

“We welcome the Panel’s recommendations for a public inquiry with full powers to investigate and expose the truth of what went on behind the walls of these cruel institutions.

“Women from these institutions have told Amnesty International they suffered arbitrary detention, forced labour, ill-treatment, and the removal and forced adoption of their babies - criminal acts in both domestic and international law. Victims have a right to truth, justice and reparation.

“The recommendations for a fully empowered public inquiry, alongside an independent panel, protection of and access to records, compensation payments and apologies for all victims, the searching of burial locations and memorialisation are all important elements in delivering long-denied justice.

“We urge the Northern Ireland Executive to waste no time in acting on these recommendations.

“We commend the steadfast determination of victims and survivors to secure the truth and justice to which they are entitled, and we thank the Panel members for their commitment to vindicating those rights.”

Professor Patricia Lundy of Ulster University, who worked with Amnesty to make recommendations to the Panel, also welcomed the report:

“The Panel has put forward clear proposals for an effective and robust investigative mechanism which can enable accountability and achieve justice for victims/survivors.

“The Northern Ireland Executive now has an opportunity to put in place the sort of inquiry and other support measures which can go some way to put right the wrongs done to the thousands of women and children who went through these institutions.”