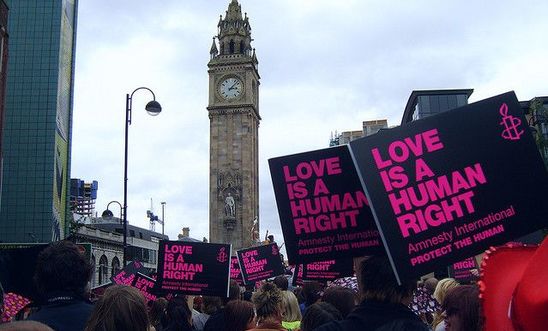 Love is a human right - at Belfast Pride

Amnesty International has welcomed the first same-sex weddings in Scotland and said it looked forward to a court challenge in 2015 to the continuing ban on such marriages in Northern Ireland.

December 31st saw the first same-sex marriages take place in Scotland, where the law changed earlier this month. Same-sex marriage was legalised in England and Wales earlier this year, with the first weddings taking place in March. The changes leave Northern Ireland as the only part of the UK with a ban still in place.

"It is great to see Hogmanay in Scotland being marked by a celebration of love with these longed-for weddings.

"Sadly, as we enter 2015, same-sex couples in Northern Ireland continue to face a ban on marriage as a result of discrimination based on their sexual orientation.

"We look forward to seeing that discrimination being challenged in the Northern Ireland courts during 2015.

"We have long predicted that, should Northern Ireland's politicians fail in their duty to end such discrimination, then gay people will resort to the legal system to have their human rights as equal citizens vindicated. We expect that to happen in 2015.

"States may not discriminate with regards to the right to marry and found a family, on the basis of sexual orientation or gender identity.

"That obligation is clear in international law. This means that marriage should be available to same-sex couples in Northern Ireland, just as it is now in Scotland, England and Wales.

"There is still a chance for Northern Ireland's politicians to do the right thing in 2015. However, if they continue to abdicate their responsibilities, judges instead will be asked to uphold the right of all our citizens not to face discrimination."

1. In April 2014, the Northern Ireland Assembly rejected a motion calling for the introduction of same-sex marriage - the third time in 18 months that Stormont rejected such proposals.