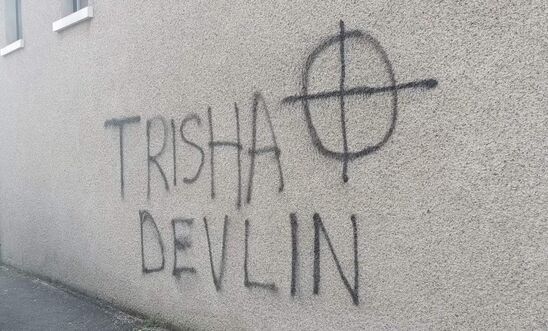 Patricia Devlin has received previous threats, including a death threat allegedly by the Ulster Defence Association

Amnesty International has condemned graffiti threats against Patricia Devlin, a journalist at the Northern Ireland edition of the Sunday World newspaper.

Graffiti has been painted on two walls in east Belfast – Finvoy Street and the Upper Newtownards Road - comprising the name ‘Trisha Devlin’ and a gun target sign.

She has previously been subject to a series of threats, including a death threat allegedly made by the Ulster Defence Association.

“Chilling threats against journalists are now being made with shocking frequency. Yet, no one is being arrested, no one is being held to account. Patricia Devlin has already been forced to make a complaint to the Police Ombudsman as a result of the PSNI’s failure to properly investigate a sickening threat to rape her baby.

“The police must get a grip on this problem.”

In October 2020, Patricia Devlin lodged a complaint with the Police Ombudsman for Northern Ireland in relation to lack of an effective investigation by the PSNI into a threat to rape her new-born son.

Sunday World journalist Martin O’Hagan was shot dead in Northern Ireland in September 2001 by a loyalist paramilitary group. No one has ever been convicted of his murder.