Nigeria: Torture so common that police stations have ‘Officer in Charge of Torture’ 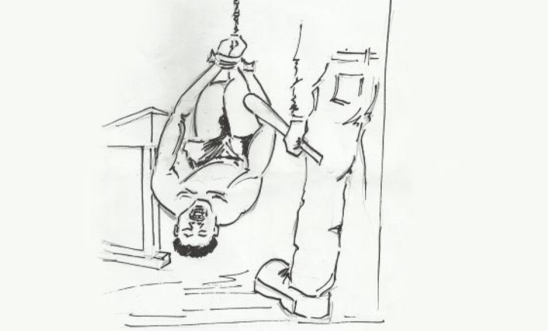 An artist’s drawing depicting a detainee being suspended upside down by their feet. © Chijioke Ugwu Clement

‘Torture is not even a criminal offence in Nigeria’ - Netsanet Belay

Nigeria’s police and military routinely torture men, women and children - some as young as 12 - using a wide range of methods including electric shocks, shootings and rape, Amnesty International said in a new report published today (18 September).

The 62-page report, ‘Welcome to hell fire’: Torture and other ill-treatment in Nigeria, shows how people in Nigeria are often detained in large dragnet operations and tortured as punishment, to extort money, or to extract “confessions” as a shortcut to 'solving' cases.

Members of Nigeria’s military are committing human rights violations on a massive scale, detaining thousands - many of whom appear to have been tortured - as they search for Boko Haram members.

However, Amnesty warns that torture in Nigeria 'goes far beyond' cases involving Boko Haram. In a recent opinion poll conducted for Amnesty, half of all respondents in Nigeria said they feared being tortured if taken into custody. In fact, torture has become such an integral part of Nigeria policing that many police stations have an informal 'Officer in Charge of Torture'.

Police officers use an alarming array of torture techniques, including ripping out fingernails or teeth with pliers, shooting victims in the hand or foot, choking detainees with a rope pulled by two police officers, pouring hot water onto open wounds, making prisoners sit on a board covered with protruding nails or spikes, and widespread use of electric shocks and sexual violence.

In one typical case from last November, a 24-year-woman called Abosede told Amnesty how she suffered sexual torture to force her to 'confess' to a crime:

'A policewoman took me to a small room, told me to remove everything I was wearing … She spread my legs wide, and fired tear gas into my vagina … I was asked to confess that I was an armed robber … I was not taken to the hospital even though I was bleeding from my vagina … I still feel pains in my womb.'

In another case, Mahmood, a 15 year-old-boy from Yobe state, was arrested by soldiers in March 2013 with around 50 other people, mainly teenage boys.

He told Amnesty that the military held him for three weeks, beat him repeatedly with their gun butts, batons and machetes, poured melting plastic on his back, made him walk and roll over broken bottles, and forced him to watch other detainees being summarily killed. He was eventually released more than a year later, arriving home psychologically traumatised and in desperate need of emergency medical treatment.

Compiled from hundreds of testimonies and evidence, the Welcome to hell fire report exposes an institutionalised use of police torture chambers and routine abuses by the military in a country that prohibits torture in its constitution but has no laws criminalising it. The report also reveals how most of those detained are held incommunicado - denied all access to the outside world, including to lawyers, families or the courts.

'Soldiers pick up hundreds of people as they search for those associated with Boko Haram, then torture suspects during a ‘screening’ process that resembles a medieval witch hunt. But this goes far beyond the appalling torture and killing of suspected Boko Haram members. Across the country, the scope and severity of torture inflicted on Nigeria’s women, men and children by the authorities supposed to protect them is shocking to even the most hardened human rights observer. Torture happens on this scale partly because no one, including in the chain of command, is being held accountable. Torture is not even a criminal offence in Nigeria. Our message to the Nigerian authorities today is clear - criminalise torture, end incommunicado detention and fully investigate allegations of abuse.'

Failure to investigate In the vast majority of cases of torture allegedly carried out by members of Nigeria’s security forces, no proper investigations have been carried out and no measures taken to bring suspected perpetrators to justice.

When internal investigations within the police or the military do take place, the findings are not made public and the recommendations rarely implemented.

Of the hundreds of cases researched by Amnesty, not one victim of torture or other ill-treatment has been compensated or received other reparation from the authorities.

The Nigerian government is well aware of the severity of the problem and has set up at least five presidential committees and working groups over the last decade on reforming the criminal justice system and eradicating torture. However, the implementation of these recommendations has been painfully slow, said Amnesty.

The report is being launched at a press conference in the Nigerian capital Abuja at 11am: Sokoto Room, 2nd floor, Transcorp Hilton Abuja, 1 Aguyi Ironsi Street, Abuja; please RSVP: susanna.flood@amnesty.org

The Welcome to hell fire report is part of Amnesty’s new Stop Torture campaign. Amnesty is pressing the Nigerian authorities to take action to investigate abuse in numerous places of detention, including in Sector Alpha military facility (known locally as “Guantanamo”), in Damaturu, in Nigeria’s north-eastern Yobe state (see amnesty.org.uk/stoptorture).

Meanwhile, in June Amnesty campaigners in London raised the case of Moses Akatugba, a 16-year-old schoolboy who was tortured by the Nigerian army and the police after being accused of stealing mobile phones. Sixteen schoolchildren brandishing pliers went to the Nigerian High Commission on 26 June (see: http://instagram.com/p/ps8Sq5t727/).