Nigeria: deaths of three IMN protesters in police custody must be investigated 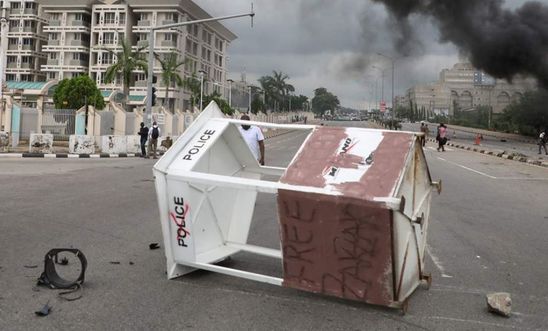 The Nigerian authorities must immediately investigate the deaths from gunshot wounds of at least three members of the Islamic Movement in Nigeria (IMN) while in police custody, and provide urgent medical care to 15 others who need treatment for life-threatening gunshot wounds, Amnesty International said today.

Amnesty has confirmed that 15 individuals, including two minors, have been held incommunicado at the Special Anti-Robbery Squad (SARS) detention facility since 22 July, following a government crackdown on IMN supporters protesting against their leader Ibrahim El-Zakzaky’s detention.

Three people have died after being denied medical treatment for their injuries. Their deaths are understood to have taken place between the date of their detention and 24 July.

“We have information confirming that three protesters died of gunshot wounds at a detention facility in Abuja after being denied medical treatment. Their deaths while in police custody sends a chilling message about the authorities’ use of lethal force to stifle dissent and their contempt for people’s right to access medical care.

“The protesters who are being held at the SARS detention facility are in critical condition and need immediate access to medical care. Any denial of such access is a violation of their human rights. The Nigerian authorities must not allow more people to die in police custody before they act.”

Witnesses told Amnesty that a team of armed policemen in two Hilux vehicles arrived at the University of Abuja Teaching Hospital, Gwagwalada, at about 5.30pm on 22 July. They rounded up 11 patients with gunshot wounds, most of them IMN members who were brought to the hospital earlier in the day.

A credible source told Amnesty that he saw at least 15 protesters with various life-threatening gunshot wounds to their legs, stomach and hips, some of them unable to walk, in detention. Among the injured detainees are two minors and two women held in the same cell.

Last week, a video showed 17-year-old Ummul Kulsum and Fatima Ibrahim Dasuki as they lay in front of a government building bleeding from gunshot injuries sustained during the 22 July protest.

“There can be no justification whatsoever for firing live ammunitions against peaceful protesters, nor for imprisoning them for merely exercising their rights to freedom of expression and peaceful assembly.

“The Nigerian police must immediately and unconditionally release all detained IMN members who have not been charged with a recognisable offence and brought before a competent civilian judicial authority. The Nigerian government must promptly investigate in an independent and impartial manner the deaths of the three detainees in police custody and bring to justice those suspected of wrongdoing.”

Amnesty is also calling for an independent and impartial inquiry into the 22 July protest, especially the killing of 11 protesters, Deputy Commissioner of Police Usman Umar and Channels TV reporter, Precious Owolabi. Only an independent investigation can determine those responsible for the violence and avoidable deaths that occurred, and allow for prosecution of those responsible in fair trials without recourse to death penalty.

Amnesty requested to visit the detainees to verify the current condition of their detention, but police are yet to grant this request.

The Islamic Movement in Nigeria and Ibrahim El-Zakzaky

The IMN is a religious and political organisation whose leader, Ibrahim El-Zakzaky, and his wife, Zeenah Ibrahim, have been in detention since 2015 despite a federal high court order for their unconditional release in December 2016.

Between 25 and 26 April 2019, the Nigerian government allowed an external medical team to examine El-Zakzaky and his wife. They were both recommended for urgent medical attention due to their deteriorating health. Media is today (5 August) reporting that the Kaduna State High Court had granted El-Zakzaky and his wife leave to seek medical treatment in India.

Since January, IMN members have protested daily in Abuja, calling for the release of their leader and asking the government to allow him access to necessary medical care.

On 9 July, a protest march by the IMN to the Nigerian National Assembly turned violent when police claimed that protesters shot and injured two policemen, while security officials killed two unarmed IMN members.