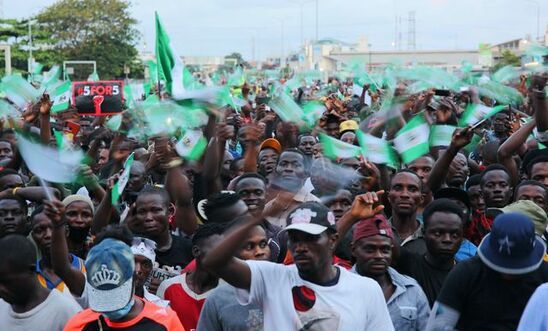 Nigerian authorities continue to cover up the truth about the brutal crackdown by security forces on peaceful #EndSARS protesters that led to the Lekki Toll Gate massacre, Amnesty International Nigeria said today, 100 days on from the attacks.

Since the assault by security forces, which killed at least 12 people, Nigerian authorities have also targeted supporters of the protests against police brutality by the disbanded Special Anti-Robbery Squad (SARS).

Investigations by Amnesty indicate that since the #EndSARS protests were violently dispersed, several of the movement’s leaders have been arrested, tortured and had their bank accounts frozen. Many others have fled into exile.

Reports from across Nigeria also indicate that police violence is still widespread despite government promises of change. Amnesty International is also concerned that the Nigerian authorities will continue their current ban on protests.

“The bloody events of 20 October 2020, when Nigerian security forces killed at least 12 people during the violent dispersal of peaceful #EndSARS protesters at Lekki and Alausa, have cast a shadow over Nigerian society that lingers to this day.

“Instead of bringing suspected perpetrators to justice and prioritising genuine police reforms, Nigerian authorities have been abusing their powers by subjecting those who supported the protests to intimidation, harassment and smear campaigns.

“Those suspected to be responsible for the killings should be brought to justice in accordance with international fair trial standards.”

The Nigerian government has set up a panel of inquiry in Lagos State to investigate complaints against SARS and the incidents at Lekki and Alausa. However, government officials and the military continue to deny that anybody was killed during the protests, while restating their resolve to punish leaders of the #EndSARS movement.

Amnesty International is calling on the Nigerian government to suspend accused officials, pending investigations, and to ensure that victims receive access to justice and effective remedies.

On 20 October 2020, the Nigerian military opened fire at the Lekki Toll Gate in Lagos on thousands of people who were peacefully calling for good governance and an end to police brutality as part of the #EndSARS movement. At least 12 people were killed.

Amnesty’s Crisis Response team investigated the incident, and verified social media videos and photographs to confirm the Nigerian security forces were present at the Lekki Toll Gate when the shootings occurred. A detailed timeline is available here.