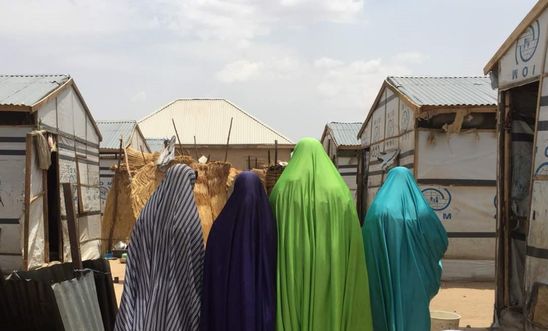 Women inside a Maiduguri based IDP camp © Amnesty International

Soldiers trading sex with female inmates in exchange for food, soap, basic necessities and the promise of freedom

An Amnesty International investigation has exposed sexual violence against children and women by security agents and inmates at two high-security prison facilities in Borno State, Nigeria.

The harrowing violations took place at Maiduguri Maximum Security Prison and Giwa Barracks where thousands of civilians, including scores of children, are being held following arrests due to claimed links to Boko Haram.

An Amnesty research team visited Maiduguri earlier this month to investigate claims made by inmate Charles Okah – first documented by Sahara Reporters – that children were being abused and unlawfully detained in Maiduguri prison. Okah alleged that three children detained on death row in Maiduguri were among the many victims of sexual abuse.

Amnesty interviewed a Maiduguri Prison detainee as well as a former prison warder who both confirmed that sexual abuse of children was widespread in the prison. The detainee said he had observed the abuse of children by adult inmates.

“It is not a secret in the prison what is happening with the little boys,” said the detainee, who spoke to Amnesty via a contact to protect his identity.

The source also told Amnesty that it was sometimes possible to hear what was happening, and this confirmed his understanding that sexual assault was occurring.

“Sometimes, you see that a little boy goes into the toilet and immediately, an adult detainee goes after them, and when the boy comes out, you don’t need to be told what has happened to him.”

The Maiduguri Prison former warder, who was also too afraid to meet Amnesty in person, confirmed that he had been aware of sexual abuse of children.

The former warder said: “The condition there [in the prison] is not good for children and it is difficult to stop what is going on with the boys. The only way is for them to be taken out of there. What do you expect when you keep children with grown up men?”

Amnesty also documented the sexual assault of a 16-year-old boy by an adult inmate in Giwa Barracks in or around January 2018, six months before all children were released from the facility.

At the time, children were being detained in a cell next to adult cells, making interactions with adult inmates inevitable. A former detainee told Amnesty he had witnessed an adult inmate “trying to take the trousers off” a sleeping boy. He said: “A boy who saw it woke the boy that was being assaulted and, in the morning, it was reported to the soldiers.”

It is understood the adult inmate was subsequently transferred a different cell, although no other steps were taken to protect the boys. This incident was confirmed to Amnesty by the boy who had been assaulted, along with 15 male former detainees.

Amnesty has obtained court documents confirming that at least 68 children are being held in Maiduguri Prison. The organsation also spoke to former Giwa Barracks child detainees who identified 39 of these children as their former cellmates at Giwa; a list that included names of the three young boys detained in the same area with death row inmates mentioned in Okah’s report.

The findings confirm that dozens of children are being held in the maximum-security prison in connection with the Boko Haram crisis. Amnesty’s findings show that 68 boys held in Maiduguri Prison were first detained without charge by the Nigerian military in Giwa Barracks before they were transferred between late 2016 and early 2017.

“This is another sad and disturbing case of human rights violations against civilians caught up in the Boko Haram crisis in northeast Nigeria.

“It is inexcusable that children are subjected to such vile treatment under government care, and likewise it is intolerable that women are once again bearing the brunt of abuse by the Nigerian security forces that are meant to protect them.

“The government has so far failed in its duty to protect these children and violated its obligations under the UN Convention on the Rights of the Child.

“The Nigerian government must ensure the immediate transfer of all children from Maiduguri Prison and those who have not been charged with a recognisable criminal offence must be released. Children suspected of criminal responsibility should only be detained in children’s facilities.

“To detain children with adults in the full knowledge that they may be abused is despicable.

“The authorities must ensure that the investigation into these allegations is prompt, independent and impartial, and that any prison officials or military members found responsible for human rights violations are brought to justice.”

Three former female detainees independently said they had witnessed such attacks and identified 10 of the male soldiers responsible - including five who worked in the detention center’s health clinic. Two of these former detainees were women who said they had been sexually violated themselves.

Another former detainee said soldiers promised to get women released if they agreed to sex, such as in the case of a woman who became pregnant by a soldier.

“Since [the soldiers] were the ones that would call the names of those to be released, it was easy for them to substitute some names. The women knew that the soldier’s girlfriend was two months pregnant. So a night before they released some women, the soldier did documentation for her and the next morning her name was called among those to be released,” the former detainee said.

Last year, female former detainees at Giwa Barracks told Amnesty about sexual violence in the detention centre. Amnesty called for an investigation into these allegations in May 2018, but it is unclear if one has been carried out.

“Even in cases where detained women apparently consented, these acts constitute rape as the soldiers took advantage of a coercive environment in which the detainees had little choice but to have sex with them.

“The soldiers held massive power over the women; they controlled much of women’s daily life in detention, they held the power to mete out arbitrary punishments on the one hand, or to provide desperately needed food and medicine on the other. And yet some abused this power. This is despicable behavior and the soldiers involved must be held accountable.

“These latest testimonies follow a pattern of violation we have repeatedly documented in Nigeria’s prisons. It is time for President Buhari to act.”

On 23 March, Sahara Reporters revealed details of a 30-page eyewitness report by Charles Okah which described a pattern of sexual violence perpetrated against women and young boys in the prison. According to the media report, there are at least 106 young boys aged between 11 and 17 in detention in the prison.

A Borno State government committee visited the prison shortly after its inauguration to investigate the allegations in the Okah report. Some prison officials were arrested but released the following day. Nothing has been heard of the committee since. Amnesty is calling on the Borno state government to make public the committee’s findings.

The Public Relations Officer of the Nigerian Prisons Service said the service would not share the report with Amnesty for security reasons because the report contains other security concerns.

The official, however, suggested that children were being detained in the same area with adult inmates at the Maiduguri Prison.

According to the official: “Because of the nature of the crime, you may have people who are not supposed to be where they are. Maiduguri is an unusual situation due to the Boko Haram crisis.”