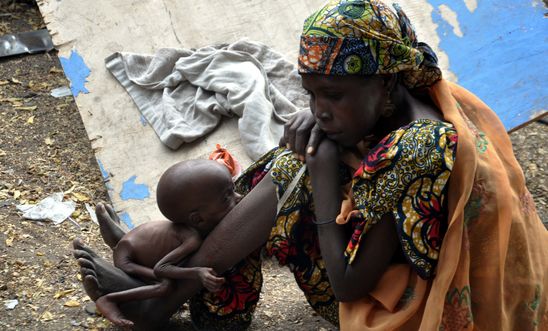 UK must urgently review support to the Nigerian military

Thousands of women and girls who survived the brutal rule of the Boko Haram armed group have since been further abused by the Nigerian security forces who claim to be rescuing them, Amnesty International revealed in a new report released today (24 May).

The report - "They betrayed us" - is the result of a two-year investigation and interviews with more than 250 people affected by the critical situation in north-east Nigeria. It examines what happened to the hundreds of thousands of people, especially women, who fled or were forced from areas controlled by Boko Haram, as the Nigerian military intensified its operations and ordered those it was ‘freeing’ to satellite camps.

Amnesty’s investigations reveal how the Nigerian military and Civilian Joint Task Force (Civilian JTF) – a militia who work alongside them – have carried out systematic patterns of violence and abuse against the population who fled Boko Haram’s rule, including war crimes and possible crimes against humanity. Women told Amnesty how they have been raped in exchange for food, and the report contains evidence that thousands of people, including children, have starved to death in the camps in Borno state since 2015.

In some cases, the abuse appears to be part of a pattern of persecution of anyone perceived to have a connection to Boko Haram. Women reported being beaten and called “Boko Haram wives” by the security officials when they complained about their treatment.

The military has also screened everyone arriving to the satellite camps, and in some locations detained most men and boys aged between 14 and 40 as well as women who travelled unaccompanied by their husbands. The detention of so many men has left women to care for their families alone.

“It is absolutely shocking that people who had already suffered so much under Boko Haram have been condemned to further horrendous abuse by the Nigerian military.

“Instead of receiving protection from the authorities, women and girls have been forced to succumb to rape in order to avoid starvation or hunger.”

UK support to the Nigerian military

The UK government is supporting the Nigerian armed forces to counter the threat from Boko Haram through British military training and by providing operational guidance and advice. Just last month, Prime Minister Theresa May met with President Buhari of Nigeria at Downing Street, where she reiterated the two countries’ “close and longstanding” defence and security cooperation.

Nigeria has recently been added to the UK’s National Action Plan on Women Peace and Security, which recognises that the Nigerian security forces have been accused of sexual abuse.

“Amnesty’s investigations show that soldiers from the Nigerian military are abusing their position to sexually exploit women and girls – there can be no denying of this.

“This evidence must serve as an urgent warning to the UK government and the British forces currently training and supporting a military that is using its power to horrifically abuse the very people it’s meant to be protecting.

“The UK government must work with relevant women human rights defenders to review UK support to the Nigerian military, and ensure that any training it’s providing hasn’t contributed to the vile abuses currently taking place in north-east Nigeria.

“If it turns out that British troops have been training or supporting any of the units involved in these crimes, a UK investigation must immediately take place and British military training to those units should be suspended.”

Key findings in the report:

Scores of women described how soldiers and Civilian JTF members have used force and threats to rape women in satellite camps, including by taking advantage of hunger to coerce women to become their “girlfriends”, which involved being available for sex on an ongoing basis.

Five women told Amnesty that they were raped in late 2015 and early 2016 in Bama Hospital camp as famine-like conditions prevailed.

Ama (not her real name), 20, said: “They will give you food but in the night they will come back around 5pm or 6pm and they will tell you to come with them… One [Civilian JTF] man came and brought food to me. The next day he said I should take water from his place [and I went]. He then closed the tent door behind me and raped me. He said I gave you these things, if you want them we have to be husband and wife”.

Ten others in the same camp said that they were also coerced into becoming 'girlfriends' of security officials to save themselves from starvation. Most of these women had already lost children or other relatives due to lack of food, water and healthcare in the camp. The sexual exploitation continues at an alarming level as women remain desperate to access sufficient food and livelihood opportunities.

Women said the sexual exploitation follows an organised system, with soldiers openly coming into the camp for sex and Civilian JTF members choosing the "very beautiful” women and girls to take to the soldiers outside. Women reported they were too afraid to refuse demands for sex.

Osai Ojigho said: “Sex in these highly coercive circumstances is always rape, even when physical force is not used, and Nigerian soldiers and Civilian JTF members have been getting away with it. They act like they don’t risk sanction, but the perpetrators and their superiors who have allowed this to go unchallenged have committed crimes under international law and must be held to account.”

Deaths as a result of hunger

People confined in the satellite camps faced an acute food shortage from early 2015 until mid-2016, when humanitarian assistance was increased.

At least hundreds - possibly thousands - died in Bama Hospital camp alone during this time. Those interviewed consistently reported that 15 to 30 people died each day from hunger and sickness during these months. Satellite images, showing how the graveyard inside the camp expanded quickly during this time, confirm their testimonies. There were also daily deaths in other satellite camps such as those in Banki and Dikwa.

From June 2016, the UN and other humanitarian agencies scaled up assistance in the satellite camps. Despite this, many women reported continued barriers to accessing adequate food, exacerbated by restrictions on their ability to leave the camps.

A number of women who arrived in satellite camps in Dikwa town in mid-2017 have not received any food assistance since they arrived, and described ongoing hunger, sickness and deaths within their camps.

Yanna (not her real name), who arrived in Dikwa in late-2017 and lived in Fulatari camp, told Amnesty: “People are dying, [always there is a] burial, burial, burial. I was thinking maybe one day it will be my own.”

Even where government and international NGOs distribute food, large-scale corruption has prevented many people from accessing it.

Osai Ojigho said: “Confining people to camps without enough food, despite the fact that those administering the camps knew the conditions were leading to deaths, violates human rights and international humanitarian law. Those who allowed this to happen may be guilty of murder.”

Amnesty’s research further reveals that hundreds of women along with their children have been held in the notorious Giwa Barracks detention centre since 2015. While most have been released, an unknown number remain in military detention.

Many of those detained since 2015 had been victims of abductions or forced marriages by Boko Haram and were detained by the military for being so-called “Boko Haram wives” instead of being rescued.

Amnesty received five reports about sexual violence in Giwa barracks, while seven women said they gave birth inside their dirty, overcrowded cells without any medical assistance. At least 32 babies and children, and five women, have died in detention since 2016.

Osai Ojigho said: “The detention of women and girls on the basis that they were allegedly married to Boko Haram members is unlawful under international human rights law and Nigerian law and is discriminatory.”

Women interviewed often spent months or years living under the repressive rule of Boko Haram. Some reported being forced into marriages with Boko Haram members or being flogged when caught breaking the armed group’s strict rules. Seven said they witnessed the executions of family members or neighbours after unsuccessful attempts to escape.

Since 2015, various NGOs and humanitarian organisations have reported sexual violence and deaths in camps for internally displaced people in north-east Nigeria. While the authorities frequently promised to investigate such reports, there has been no tangible action to address the problem and no one appears to have been brought to justice. It is not always clear if these investigations were carried out as no reports have been made public.

In August 2017, the Acting President of Nigeria Yemi Osinbajo established the Presidential Investigation Panel to review the military’s compliance with its human rights obligations. Many women testified before the Panel, which submitted its report to President Muhammadu Buhari in February 2018.

“Now is the time for President Buhari to demonstrate his frequently expressed commitment to protect the human rights of displaced people in north-east Nigeria. The only way to end these horrific violations is by ending the climate of impunity in the region and ensuring that no one can get away with rape or murder.

“The Nigerian authorities must investigate – or make public their previous investigations – on war crimes and crimes against humanity in the north-east. They must also urgently ensure, with the support of donor governments, that people living in the satellite camps receive adequate food, and that those arbitrarily detained in military detention facilities are released.”

Amnesty’s report is the result of an extensive investigation involving more than 250 interviews and covers satellite camps established by the military in seven towns in Borno state, including Bama, Banki, Rann and Dikwa. It also includes interviews with 48 women and girls released from detention and the review of video, photographic and satellite imagery.

Amnesty International shared its findings with the Nigerian authorities but, at time of publication, no response has been received.